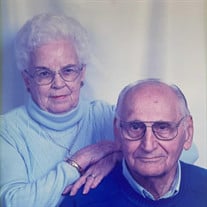 Jeanne Marie (Quinlan) Bertholdi passed away at North Bay Medical Center, Tuesday September 7th, 2021. She was 97 years old. Jeanne was born November 10th, 1923 in Toppenish, Washington to John and Elizabeth (O’Grady) Quinlan. Donald Richard Bertholdi (Jeanne’s beloved husband) passed away 3 days later at home on Friday, September 10th, 2021. He was 99 years old. Donald was born March 7th, 1922, in Stockton, California to Steven and Ora (Schwoerer) Bertholdi. Jean grew up in Casper, Wyoming, graduated from Natrona County High School. After marrying Don, she moved to California where she worked several years at JC Penny’s and 17 yeas as a secretary for Holy Spirit School. After graduating from High School, Donald joined the California National Guard in 1939 as a founding member of the first Battalion, 184th Infantry. He went on to join the Air Force from 1940 to 1945. He worked for 30 years as a Civil Servant at Travis Air Force Base after. After retirement Donald became a member of the Fairfield Senior Center. He was very active with the Bingo program and spent many hours working on different projects in the Wood Shop. Donald and Jeanne would have celebrated their 78th Wedding Anniversary on October 2nd, 2021. They were both big sports fans – Jeanne was a huge fan of the San Francisco Giants and the 49ers and Donald was a fan of the rival Oakland Athletics. Which always made baseball season fun around their house. Donald and Jeanne are survived by their daughter Ellen Miles, many grandchildren, and several great-grandchildren and Jeanne’s brother Gerald Quinlan. They were preceded in death by their sons, Joseph F. Bertholdi and David A. Bertholdi, Donald’s brother Robert and Jeanne’s sisters Kathleen, Elizabeth, Dorthy, Della and brother William. A Funeral Service with a Catholic Prayer Service will be held at 2:00 PM Wednesday, September 29th, 2021 at Bryan-Braker Funeral Home, 1850 W Texas St, Fairfield, CA. The Burial will be Thursday September 30th, 2021at 10:00 AM at Saint Alphonsis (Fairfield) Cemetery. Arrangements are under the care of the Bryan-Braker Funeral Home, 707-425-4697, www.bryanbraker.com.

The family of Jeanne and Donald Bertholdi created this Life Tributes page to make it easy to share your memories.

Send flowers to the Bertholdi family.