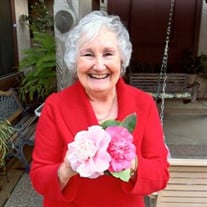 Janie Anne (Bryant) Matthews, 86, passed away peacefully on April 6, 2022. She was born in 1935 during the depression era, on a working tobacco and produce farm in Clinton, North Carolina. Janie was raised with her two brothers and two sisters by loving, hard-working parents who believed idle time was a recipe for mischief. Therefore, she spent much of her youth keeping busy in the fields with tilling, planting and harvesting. She loved going to school, church and summer Vacation Bible School. From that upbringing, she acquired a relentless work-ethic and insatiable appetite for education. Janie was the first in her family to graduate from college, earning a Bachelor of Science degree from Flora Macdonald College in Red Springs, NC. Early on, Janie became a substitute teacher, then a full-time high school educator. With the advent of computers, she earned a Master’s Degree in Business Education from the University of San Francisco. Soon after, she became an instructor of computer programming and business applications. Janie taught day classes at Travis Air Force Base Adult-Education and during evenings, she developed instructional curriculum and led the Business Computing Department at Solano Community College. Janie enjoyed keeping her North Carolina roots alive for her children, grandchildren and great-grandchildren. She was an active member in the Chief Solano Chapter Daughters of the American Revolution (DAR). Janie Anne is preceded in death by her parents, Amos Liston Bryant and Mary Susan Pearson Bryant. She is survived by her dear sister, Susan Boney Dilley Hudson—and by her three children, Angela Susan (Richard) Johnson, Carey DeWayne (Christine) Matthews and Janie DeLaine (Larry) Reynolds. For over 40 years, Janie’s sons-in-law and daughter-in-law were lovingly called, “my children”. Her stated testimony was the greatest joys in her life were Jesus Christ, her Lord and Savior, her children, 15 grandchildren and 19 great-grandchildren. Above all, Janie was a fierce believer in the Gospel of Jesus Christ, the good news of God’s plan for our salvation. She was a disciplined devotional reader and spent each day reading scripture and writing notes. Her favorite hymn was, “How Great Thou Art”—she now resides in the presence of God Almighty and will be greatly missed by all who knew and loved her. Janie was well-known for her kind and loving demeanor, and her “day-brightening” smile that was generously given to everyone she met. Her sweet Southern drawl never left her, nor did her infectious laughter and ability to make whoever she was talking to feel like the most important person in the world. The family requests in lieu of flowers, tax-deductible donations be made in her honor to one or both of her favorite charities: The Paradise Valley Estates Employee Appreciation Fund; an annual expression of gratitude for those who serve the veterans and residents living at PVE. She dearly loved all those who served her and contributed faithfully to bless them. Donations can be made payable to and mailed: Northern California Retired Officers Community 2600 Estates Drive Fairfield, CA 94533 Memo: “Employee Appreciation Fund” Chief Solano Chapter, National Society Daughters of the American Revolution, where she served as Regent, Advisor, Historian, and 2nd Vice Regent during the years 2005-2013. She was a great encourager to young people to further their education, and to her fellow DAR members to generously support their annual scholarship award to a graduating high school senior. Donations can be made payable to and mailed: Chief Solano Chapter, NSDAR 203 Wicklow Drive South San Francisco, 94080 Memo: “The Scholarship Fund”

Janie Anne (Bryant) Matthews, 86, passed away peacefully on April 6, 2022. She was born in 1935 during the depression era, on a working tobacco and produce farm in Clinton, North Carolina. Janie was raised with her two brothers and two sisters... View Obituary & Service Information

The family of Janie Anne Matthews created this Life Tributes page to make it easy to share your memories.

Send flowers to the Matthews family.