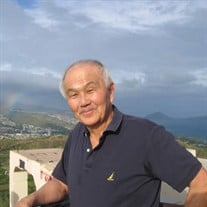 Obituary for Dr. James Tanaka Dr. James (Jimmy) Tanaka passed away peacefully at his home in Fairfield, California, on August 25, 2021. He was born in San Luis Obispo, California, December 20, 1933. He is survived by his wife, Peggy Sue Tanaka; sister, June Tanaka; sister-in-law, Marge Tanaka; Two stepsons, Anthony and Stephen Manis; daughter-in-law, Anna Manis; grandchildren, Drew Manis and husband Ben, Carlyn Raphel, Matthew Manis, Tanaka (Tana) Manis (his namesake), Connor Manis; nieces Laura Tanaka and Ann Finney; nephews Donald Tanaka and wife Melanie, Richard Tanaka and wife Ann; as well as several much-loved great nieces and nephews. Jimmy and his family were part of the Japanese American community that was incarcerated during World War II, when they were removed from their farm in California and sent to live in a horse stall at the Santa Anita Racetrack until their camp, located in Rower, Arkansas, was completed and they were relocated there. Jimmy's brother Roy volunteered from the camp and was inducted into the US Army, and his uncle Kanami Kanazawa of Hawaii volunteered and fought in the 442nd. After the war, the Tanaka Family moved to Philadelphia, where Jimmy began his long list of accomplishments in Education and Sports. He served 22 years in the US Air Force, where he coached Gymnastics and Judo at the Air Force Academy in Colorado Springs. He served as an interpreter at the US Embassy in Japan, flew the C5 aircraft, and retired with honors as a Commissioned Officer. Upon retirement he began his 38-year teaching career at Solano College, where he taught and coached Gymnastics, Judo, Health & Fitness, and Self Defense. When he was not teaching at the college, he spent his time teaching flying and sailing, as well as owning his real estate business, Intercontinental Realty. Jimmy was never content to just learn the basics, and always made sure to go the extra mile and learn enough to become a teacher or instructor of any subject that interested him. In his personal life, he loved to travel and made it his goal for he and his wife to travel to all seven continents, as well as climb as many of the tallest mountains that they could, which included the tallest peaks on five continents, and hiking up to Base Camp of Mount Everest just a few years ago.

Obituary for Dr. James Tanaka Dr. James (Jimmy) Tanaka passed away peacefully at his home in Fairfield, California, on August 25, 2021. He was born in San Luis Obispo, California, December 20, 1933. He is survived by his wife, Peggy Sue Tanaka;... View Obituary & Service Information

The family of James H. Tanaka created this Life Tributes page to make it easy to share your memories.

Send flowers to the Tanaka family.