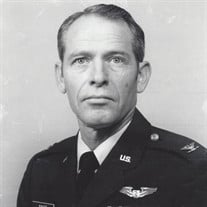 James “Terry” Swift Colonel, USAF Retired July 12, 1931 – December 13, 2020 Vacaville, CA James Terrance Swift of Vacaville, California passed away on December 13, 2020 after living a full life as a loving husband and proud father, Air Force Colonel and as a dedicated physician. Born on July 21, 1931 in Chicago, Illinois to James Joseph and Bernice Swift, Terry spent his childhood in Greenfield, Iowa. Terry graduated from Montebello Senior High School in 1949 before attending the University of Southern California where he graduated in 1954. In 1958, Terry completed his medical training by earning his MD after graduating from the University of Southern California Medical School, Los Angeles, California. Upon graduation from medical school, Terry moved to Washington D.C. where he entered active duty as an Air Force officer and was assigned to the Walter Reed Army Medical Center for five years where he undertook his one-year rotating internship. In 1959, Terry moved to Lakenheath, England and served at the USAF Hospital Lakenheath serving as a General Medical Officer until 1962. During this period, Terry attended the Air Force’s primary course in Aerospace Medicine and graduated as a Flight Surgeon. Terry then spent the next four years at Mather Air Force Base in Sacramento, California providing medical care to aircrews as a flight surgeon. In the fall of 1966, Terry moved to Philadelphia, Pennsylvania to complete a residency in Dermatology at the University of Pennsylvania. Over his 24 years of service in the Air Force, he rose to the rank of Colonel. Assignments throughout the United States and the world included Flight Surgeon and Chief of Medicine, Clark AB Hospital, Republic of the Philippines; Dermatologist, Travis AFB Hospital, California; Chief Medical Officer, USAF Hospital Lakenheath, England; Dermatologist, and Travis AFB Hospital, California. From 1980 until 2000, Terry served as a Dermatologist and Chairman of Tumor Board for 8 years at the Napa State Hospital in Napa, California where his ongoing and lifelong commitment to patient care continued until his retirement. Terry was a voracious reader, enthusiastically collected cookbooks, enjoyed traveling, skiing, cooking, woodworking, and photography. Terry is survived by his beautiful wife of 25 years, Ruby Boyd, his six children, Michael, Debbi, Teresa, Sandra, Adam, and Renee his 10 grandchildren. He is preceded in death by his brother Gary and parents James Joseph and Bernice Swift. Burial with full Military Honors at Sacramento Valley National Cemetery, 5810 Midway Road, Dixon, CA. Graveside service held on Tuesday, January 5, 2021, 10:30 AM. Arrangements entrusted to the direction and care of Bryan–Braker Funeral Home, 1850 West Texas Street, Fairfield, CA. In lieu of flowers, memorial contributions may be made to the Alzheimer’s Association. Due to Coronavirus, Celebration of Life will be delayed to a future time and date.

The family of James Terrence Swift created this Life Tributes page to make it easy to share your memories.

Send flowers to the Swift family.