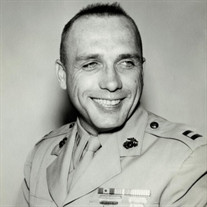 JAMES DOUGLAS JERRELL Nov. 26, 1930 - Feb. 24, 2021 James Douglas Jerrell, 90, passed away Wednesday, Feb. 24, 2021 in Vacaville, California. James, Jim, was born Nov. 26, 1930 in Glenwood Springs, Colorado to Elijah and Maude Jerrell (Beard). He married Estella Moyer on July 13, 1965 in San Diego, California. Jim graduated from the Colorado School of Mines with a professional master’s degree in mining engineering in 1952 and joined the United States Marine Corps that same year. He proudly served for 25 years retiring at the rank of Captain. His tours of duty included Korea, Vietnam, and onboard the aircraft carrier the USS Oriskany to name but a few. In his post-military career, Jim was an engineer specializing in CAD systems, owned his own drafting business, Big Jim Enterprises, was a jewelry designer and an accomplished watercolor painter. An avid astronomer, Jim hosted stargazing events at Rush Ranch in Suisun City where he shared his knowledge and love of the planets and constellations with fellow enthusiasts and novices. He was always eager to let visitors experience the universe through one of his custom-made telescopes and introduced many to the joys and wonders of astronomy. A resident of Fairfield, California for more than 45 years, Jim was a faithful member of the parish of Grace Episcopal Church. Jim is survived by his daughters, Charlene Jerrell of Orange County and Susan Jerrell of Los Angeles; as well as three grandchildren; two great-grandchildren; and two great-great-grandchildren. He was preceded in death by his wife, Estella Mae Jerrell; daughter, Karen Lee Knoppel; mother, Maude Jerrell; father, Elijah Wilson Jerrell; sisters, Amy, Marjorie and Helen; and his brother, Hubert S. Jerrell. Private burial will take place at 11 a.m. Wednesday, March 17, 2021, at Suisun-Fairfield Cemetery, 1901 Union Ave., Fairfield. In lieu of flowers, please consider donating to the Semper Fi & America’s fund at https://semperfifund.org or the Alzheimer’s Association at www.alz.org Funeral arrangements entrusted to Bryan-Braker Funeral Home, Fairfield, 707-425-4697. You may sign the guest book at www.bryanbraker.com.

The family of James Douglas Jerrell created this Life Tributes page to make it easy to share your memories.

Send flowers to the Jerrell family.