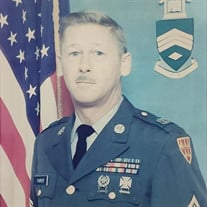 Jack Clifton Parker II July 4, 1947 March 11, 2022 Jack Parker, born on July 4, 1945 passed away due to natural causes on March 11, 2022. He was the kind of person that lit up a room. His cheerful disposition was infectious and embraced by everyone around him. He was a loving husband to Leigh, his faithful soulmate for 50 years. He bestowed the importance of family upon his two surviving sons, David and Steven. In doing so, he laid a strong foundation for them as they strive to emulate the qualities he possessed as a father. To those that knew him well, he was many things – fun, loving, and smart. To his siblings, he was there when it mattered most. He never failed to rise to the challenge, no matter how daunting it was. Following in his father’s footsteps, Jack was a veteran of the U.S. Army. He retired with 24 years of service, achieving the rank of First Sergeant. Throughout his service, he earned a multitude of accolades and recognition for his exceptional leadership and professional achievement. His leadership and professionalism allowed him to excel in his second career, managing multiple self-storage facilities, but this time, working side-by-side with Leigh. Together, they achieved record sales despite the company’s zero fraternization policy! Jack is survived by his loving wife, Leigh; his children, David and Steven; his siblings, Joyce Rohrer and Jackie (Bill) Hampton; his daughters-in-law Erika (spouse of David) and Mary (spouse of Steven). He is also survived by his grandchildren Mikayla, Isaiah, Elianna, and Sofia. Jack is preceded in death by his sister, Claudia Jean Knudsen; his brother-in-law, Bill Rohrer; and his parents, Jack and Beryl Parker. Jack’s light-hearted approach to life will be missed. We will toast in his honor and love for Miller Lite frequently! The Parker family welcomes donations made to the Jack C. Parker II Memorial Fund to benefit St. Jude Children’s Hospital as an expression of sympathy in lieu of flowers.

Jack Clifton Parker II July 4, 1947 March 11, 2022 Jack Parker, born on July 4, 1945 passed away due to natural causes on March 11, 2022. He was the kind of person that lit up a room. His cheerful disposition was infectious and embraced by... View Obituary & Service Information

The family of Jack Clifton Parker Jr. created this Life Tributes page to make it easy to share your memories.

Send flowers to the Parker family.