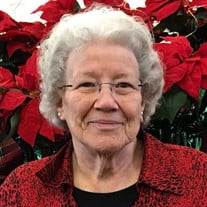 Please send flowers to Bryan Braker Funeral Home 1850 W. Texas St. Fairfield, CA 94533 Ila Mae Apgood Mineer was born in Malad, ID. on January 7, 1932. She passed away in Santa Cruz, CA. on August 14, 2019. Ila Mae was a long time resident of Fairfield, CA. She was preceded in death by her parents, her brother Lyle Apgood, a great-granddaughter, a great-grandson, and her husband Byron. She is survived by her​ children Rodney Mineer, Donald (Karen) Mineer, Linda (Kirk) Mineer Anderson, Brent (Sherry) Mineer, Paul (Shelly) Mineer, as well as 17 grandchildren and 21 great-grandchildren with 1 more great-grandson to be born next month. She was raised in Blackfoot, ID. While in Idaho, she earned her degree as a Registered Nurse. She also met and married Byron after a romantic moonlit stroll along the waterfalls in Idaho Falls. They were married in the Salt Lake Temple on June 8, 1953. They had been married 58 years at the time of Byron's death in July 2011. The favorite part of her stellar career as an RN was assisting in the deliveries of thousands of babies. Ila Mae worked as a charge nurse in many different departments including the ER. She was the Nurse that many Doctors requested for high-risk deliveries, because of her legendary skills and ability to anticipate what was needed before the Doctor could see it coming. She finally consented to retirement at the young age of 72! The favorite part of her life was being a mother, grandmother, and great-grandmother. She especially loved to see her grandchildren and great-grandchildren. When families would visit Grandma Ila Mae, those visits usually would include a tour of the Jelly Belly Factory and a trip to Fenton’s Ice Creamery. She diligently sent out birthday cards to everyone with Two Dollar bills for each year. When Brent & Sherry and Paul & Shelly lived nearby it allowed her to visit with their families. Ila Mae made every effort to attend birthdays, baptisms, sporting events, dance recitals and anything else her grandchildren were involved in around the western states. Ila Mae was fondly known as “Auntie Ike” by her nieces and nephews. She LOVED road trips! Ila Mae was an avid knitter and crocheter. Many family and friends have been the recipients of her afghans and marvelous creations. She loved to swim any time she could and enjoyed water aerobics. Her sweet tooth favorites were anything chocolate and caramel, strawberry ice cream and root beer floats. Her eldest son Rodney returned home to help care for Ila Mae and Byron after one of her surgeries. After Byron’s death, Rodney continued to live and travel with Ila Mae, and cared for her up to the time of her stroke. We want to thank the many Ward Members and friends who have also assisted with her recovery after her multiple surgeries. There are too many to count, you know who you are. We thank you and love you for your service and compassion. Ila Mae made yearly treks back to Idaho to visit her parents and to meet up with her brother Lyle and his family. She loved traveling to Yellowstone. She often visited Idaho and Utah to see family. She loved attending the Sacramento Jazz Festival with her dear friend Doris Miller, her cousin Sharon Peffer and many other friends & family. She often wintered in Arizona, and was pampered by her son Don and his wife Karen. She loved to travel and enjoy time with family. The favorite part of Ila Mae’s retirement was continuing her world travels and serving as a worker in the Oakland Temple for nearly two decades. She enjoyed road trips anywhere or any time there was a family gathering, or to see Church History sites. There was rarely a time she missed a family event. She loved her cruises through the Panama Canal, along the Rhine River, the Hawai’ian Islands and the Canadan coast. Some notable places she traveled were England, Western Europe, China, Russia, Mexico and Hawai'i. She also loved to spend time at the beach any chance she got. Ila Mae was a faithful and life-long member of The Church of Jesus Christ of Latter-Day Saints,. She was a Den Leader for Cub Scouts, and served most of her life in the Primary organization. Ila Mae was a B.S.A. Merit Badge Counselor for First Aid and was the Camp Nurse at Girls Camp for many years. She often fed the missionaries and cut their hair. She shared her love for the Book of Mormon with her family and others. Her favorite calling was serving in the Primary. Despite her short stature, Ila Mae was a spiritual giant. She suffered a stroke in February 2018. Although her mobility was affected, her spirits were not dampened at all. During the last 10 months of her life, she enjoyed loving and exceptional care while she lived with her grandson, Joshua, Laura, and their baby Hendrix in Santa Cruz. They took her on many adventures and were often joined by her daughter Linda and her favorite son-in-law, Kirk Anderson. Together, they visited Utah many places in California, including: San Diego, Coronado Island, Oceanside and Monterey, as well as a trip to the Rose Parade. In May 2019, Ila Mae had the opportunity to visit the Oakland Temple with members of her family before it was rededicated. She was generous. She was kind. She was a care-taker. We will miss her beautiful and squinty-eyed smile. The funeral services will be Tuesday, August 20th at 101 Oakwood Drive, Fairfield, CA. 94534. There will be a visitation and viewing from 9:30 a.m. to 10:45 a.m. with Funeral Services being held at 11:00 a.m. Please feel free to wear blue in honor of Ila Mae’s favorite color. A complete obituary is available online at https://www.bryanbraker.com/obituaries/Ila-Mae-Mineer/ Ila Mae will be interred with her husband, Byron, at the Sacramento Valley National Cemetery in Dixon, CA. on September 4, 2019 at 1:30 p.m. All are welcome to attend the interment services at the Sacramento Valley National Cemetery

The family of Ila Mae Apgood Mineer created this Life Tributes page to make it easy to share your memories.

Send flowers to the Mineer family.