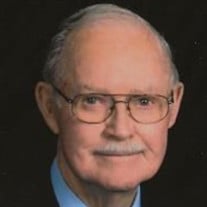 HENRY J. BAILEY JR. ‘JEFF’ Oct. 18, 1933 – Aug. 23, 2020 I was born Oct. 18, 1933 in Hill County Texas to Jeff Sr. and Gladys Bailey (Old). When I was 10, we moved to Waco, Texas where I attended school. In 1951 I married Beverly Crow. We had one daughter together. The marriage ended in 1953. In 1954 I was inducted into the U.S. Army. After Boot Camp I was sent to Radio School in Georgia. I was then sent to Austria. I enjoyed my time in Austria and was able to travel and see other parts of Europe as well. In 1955 I was sent back to the U.S. and was stationed at Ft. Devens, Massachusetts until my discharge in 1956. Later that year I moved to Coalinga, California. It was there I met Frieda Bowman. In 1957 we were married and became parents of three children. Frieda lost a two-year battle with cancer in 1989. In 1990 I met June Williams at the church we were attending, and we were married later that year. I worked 35 years in the Petroleum Industry. I retired in 2000 after working the last 28 years for Time Oil Co. in Richmond, California. I am survived by my children, Janette Orr (Kenneth), Henry 'Jeff' Bailey III, James Bailey (Joanna) and Bernadette Arp (Randy); four granddaughters; one grandson; four great-granddaughters; two great- grandsons; and many friends and family. I was preceded in death by my parents, Henry J. 'Jeff' Sr.; and Gladys M. Bailey; my sister, Darlie Florence Bailey; my second wife, Frieda Mae Bailey; and my third wife, Melba June Bailey. I will be buried at Rockville Cemetery, 4219 Suisun Valley Road, Fairfield, California. Due to Covid-19, a private family interment will take place. In lieu of flowers, please send donations to the Alzheimer's Association at https://www.alz.org/. Arrangements are under the direction of Bryan-Braker Funeral Home, 707-425-4697. You may sign the guestbook at www.bryanbraker.com

The family of Henry Jefferson Bailey Jr created this Life Tributes page to make it easy to share your memories.