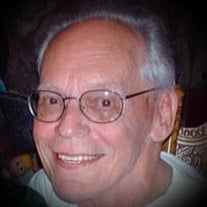 Henry “Hank" Thomas Allen, 88, of Fairfield, CA, died peacefully at home on August 7, 2019, just 12 days after his 66th wedding anniversary. His wife and daughters were with him. Henry was born on May 30, 1931 in Bellevue, Kentucky. He was the sixth of eight children born to the late Charles Clark Allen and Blanche Vaught. A child of the Great Depression and World War II, he grew up along the bank of the Ohio River in the small city of Dayton, in Campbell County, Kentucky. Inspired by his Uncle, a WWII hero, Henry enlisted in the military in 1949. He became a dedicated career military man, serving his country in Japan during the Korean War, and at Phan Rang AB during the Vietnam War. He received many awards and decorations during his military career, including the Bronze Star. In 1972, after 23 years of active duty, Henry retired from the United States Air Force as a Master Sergeant. After the Air Force Henry went on to have a second career with Stauffer Chemical Co. in Martinez. He worked for another 20 years before retiring for good in 1993. Henry met his future wife, Chiquita Arancon, while stationed at Hickam AFB, Hawaii. The two were married in 1953 at Ft. Yuma, California. Together they had five daughters. They spent many years in Hawaii before Henry’s military career moved them to Travis AFB, Vandenberg AFB, and Fairchild AFB. In 1972 Henry and his family returned to Travis AFB and set up permanent residence in Fairfield. Henry enjoyed many things in life and had many friends. He often reminisced about his home town of Dayton, Kentucky and could easily entertain people with stories of growing up at “the bend in the river.” With his quick wit and unique sense of humor, he was always making people laugh. In his spare time, Henry liked to play cards, and he liked to bowl. He was a very good bowler, and participated in USBC league bowling for many years. In addition, Henry was also a true baseball fan. His team was the San Francisco Giants, but you could catch him rooting for his home town team, the Cincinnati Reds, as well. Henry is survived by his wife, Chiquita; daughters, Mary Ann “Tutie” Brennan of Kamuela, HI, Mary Lee “Cricket” (Dave) Kanouff of Vacaville, CA, Diedre “Dede” Allen-Wilson of Mustang, OK, Anna “Punkin” (Todd Meyers) Allen of Vacaville, CA, and Cassandra “Casey” (Bob) Collier of Vacaville, CA; grandchildren, Sundance and Dylan Brennan, Alyssa Allen, Alex and Andrew Meyers, and Samuel and Maxwell Collier; four great-grandchildren; brothers Charles “Pooch” Allen of Ogden, UT, and Bob Allen of Newport, KY; and numerous nieces and nephews. Henry is preceded in death by his sisters Minerva “Pearl” (nee Allen) Rogg, Henrietta (nee Allen) Makoid Luongo, and Betty (nee Allen) Seifert; brothers, Daniel and William Allen; and son-in-law Darrell Wilson. There will be a private Blessing of the Ashes at Bryan-Braker Funeral Home in Fairfield. At Henry and Chiquita’s request, interment of ashes at the Sacramento Valley National Cemetery will be delayed until such time that husband and wife can be interred together. Full Military Honors will take place at that time. Friends are invited to attend a memorial service for Henry at Bryan-Braker Funeral Home in Fairfield, the date to be announced on the Bryan-Braker website. Arrangements entrusted to Bryan-Braker Funeral Home (707) 425-4697. Please visit and sign the guestbook at www.bryanbraker.com

The family of Henry Thomas Allen created this Life Tributes page to make it easy to share your memories.

Send flowers to the Allen family.