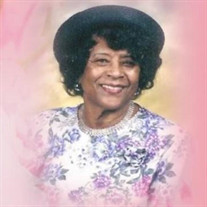 Helen Betty Warfield February 9, 1925 – March 11, 2021 Sister Helen Betty Warfield, the only child of the late Myrtle Peterson Washington and James Washington, was a native of New Orleans, where she met and married Benjamin Martin Harrison, Sr. From that union, they had two sons: the eldest, Dr. Benjamin Martin Harrison, Jr. of Gilbert, Arizona, and their second son, Mr. Cleo Francis Harrison of New Orleans, Louisiana. The latter son preceded her in death in 2014. Helen later married Sergeant John Warfield, Sr. who served in the United States Air Force. They spent many happy years traveling the world. As a military family, they relocated and settled in Fairfield, California. From this union, there were three sons: Mr. John Warfield Jr, who also preceded her in death in 1975, Mr. Michael Warfield of Seattle, Washington, and Mr. Broderick Warfield of Fairfield, California. Helen remained a resident of Fairfield from the early 1960s until she transitioned to be with the Lord on Thursday March 11th. At an early age, she was baptized by the late Reverend Samuel Martin Harrison, Senior Pastor of the Shiloh Baptist Church of New Orleans, Louisiana. A faithful servant of the Lord, Helen attended Mount Calvary Baptist Church of Suisun, California, where the Reverend Jasper Lea was her Pastor. She leaves to mourn her passing three sons, numerous grandchildren, great grandchildren, great great grandchildren, and a host of cousins and close family friends. She will be deeply missed by those who loved her, but God loved her more. May she rest in eternal peace.

The family of Helen Betty Warfield created this Life Tributes page to make it easy to share your memories.

Send flowers to the Warfield family.