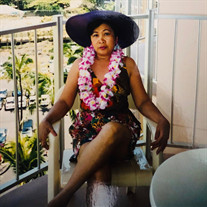 Gloria, Loving Mother, Grandmother, Sister and Aunt sadly passed away on the morning of Saturday, July 13, 2019 The first-born daughter of Candido and Lorenza Larios both of whom have preceded her in death, was born February 28, 1940 in Pangasinan, in her home country of the Philippines. At a young age she admirably took on the responsibilities of helping her mother support and raise her younger siblings. Often working odd jobs to help clothe, feed and assist in their education and upbringing. She would marry her love, Valeriano Celis; the son of a World War II and US army veteran In 1963. They would eventually start a family with the first of 4 children at the time. Her dreams of a better life inspired her to bring her family to the U.S in 1970. Eventually becoming an American citizen in 1973 and paving the way for her parents and siblings to also seek better opportunities here in the United States. All while supporting her own growing family. In 1971 she would start a career at the prestigious Westin St. Francis Hotel in the beautiful city of San Francisco Ca. A career that would span an illustrious 37 years and eventually end in her retirement in 2008. She started her career in housekeeping services. Eventually working her way up to sous chef, helping to feed the thousands of Westin employees as well as local and foreign dignitaries on a daily basis. An exemplary employee, Gloria was nominated and received several awards over the years for her hard work and dedication. In 2005 she was honored with a place on the Westin St Francis Allstar Team. An honor only bestowed to a deserving few. Gloria was loved and well respected by her peers, as she also loved what she would consider her second family at the St Francis Hotel. Gloria was a dedicated and loving wife, mother, grandmother and great grandmother. Helping to raise all of her grandchildren along the way. Her favorite pastimes included happy trips to Cache Creek Casino where she loved playing the slot machines. Bingo was also a favorite of hers as she would spend hours playing in anticipation of a big payout. She loved watching game shows in her spare time. Let’s Make a Deal, The Price is Right and Wheel OF Fortune being amongst her favorite. As well as the show Chopped on the Food network, which she would watch religiously every evening. She was also well known for her amazing cooking skills. Her love and expertise of Filipino cuisine was second to none. None more special than her signature dish Kare’ Kare’. A tasty stew of beef oxtail in a savory peanut butter sauce and Asian vegetables that was always a hit at any and every party. Gloria had such a big heart and an open home policy. Anybody that would visit her home was always welcomed with open arms and a home cooked meal. Gloria is survived by her husband of 55 years, Valeriano Celis, Siblings: Perla, Carlina, Leticia, Merle and brothers Austing and Doming Children: Dina, Amy, Lorena, Arnold and Jayson. Grandchildren Gabriel, Andrew, Kirsten, Jaylyn, Rachel, Devin, Dylan, Venchenzo, Rocco, Jaycinda and Madison. Great Grandchildren A’sjon, Avaya and Aj. She will be missed dearly by all those she loved. And may she rest in Eternal Peace. We Love You Mom!! Following the Mass a Hosted Reception will be at the Mandarin Restaurant 2 19 Texas Street, Fairfield, CA 94533

Gloria, Loving Mother, Grandmother, Sister and Aunt sadly passed away on the morning of Saturday, July 13, 2019 The first-born daughter of Candido and Lorenza Larios both of whom have preceded her in death, was born February 28, 1940 in Pangasinan,... View Obituary & Service Information

The family of Gloria Larios Celis created this Life Tributes page to make it easy to share your memories.

Send flowers to the Celis family.