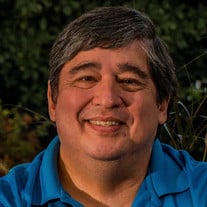 Gerald “Chach” Quinn October 4, 1959 – November 27, 2019 Gerald “Chach” Quinn passed away on Wednesday, November 27, 2019 at his home surrounded by family. Chach was born on October 4, 1959 in Sacramento, California to William Thomas Quinn and Setsuko Suzki who preceded him in death. As a son of an Airmen, his family moved around a lot before ending up in Solano County. It is here in Solano county that he grew up. He met his first wife, Donna, working at Mister Steak Restaurant in Fairfield. They were married in 1980 and stayed married until her passing in 2016. Chach had many working accomplishments throughout his life, but before his career in law enforcement, Chach received an associate degree in electronics. He then went on and served the Solano County Sheriff's Department for 13 years to which he medically retired. After retiring, he worked at Charter Systems for several years before beginning his path through self-employment. Some but not all of Gerald’s hobbies were Karate, in which he reached the rank of Professor in Kajukenbo Karate. Gerald loved Karate ever since he was a child. He also volunteered with Mission Solano for several years as part of their food giveaways as well as their Christmas events, for Christmas was one of his favorite holidays. If this wasn’t enough, he also volunteered for security for dozens of events throughout the state of California. He was a member of Liberty Church for 12 years. During his Christian part of his life, he taught many young adults, men, women, and homeless individual, and to this day they are part of his adopted family. He is survived by his second wife, Lori Lancaster-Quinn; his oldest son, Ryan (Megan) Quinn; his second son, Alex (Rebeca) Quinn; brothers, James (Susan) Quinn and their children, Destiny and Genevieve; Joe (Joanna) Quinn and their children, Tyler Quinn and Christian Iwanicki; and someone who Chach called “brother,” Steve (Starla) Studer and their children, Micah, Levi, Nathan, and Esther. He will be missed as well from his extended family from Lori’s side, sons, Phillip and Zachary Graham; daughter, Sara (Marquel) Dawson; as well as Gerald’s grandchildren, Laiona and Marquel. Chach was the kind of person in which anyone he met he immediately welcomed with open arms! He opened his door and heart for many “friends” that turned into family. He will be dearly missed and treasured not only by the people listed above, but by everyone he encountered. His celebration of life will be held at Liberty Church, 2641 N Texas St, Fairfield on Monday, December 16th at 12:00 PM. Arrangements are under the care of Bryan-Braker Funeral Home, 707-425-4697. You may sign the guestbook at www.bryanbraker.com.

The family of Gerald "Chach" Quinn created this Life Tributes page to make it easy to share your memories.

Send flowers to the Quinn family.