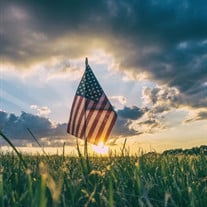 GERALD ‘JERRY’ LAPLANT March 21, 1937 - Jan. 1, 2022 Gerald 'Jerry' Russel LaPlant passed away peacefully at his home in McDonough, Georgia at 11:30 am Eastern Time on Jan. 1, 2022 after a long battle of Pulmonary Fibrosis. Jerry is survived by his sons, Kenneth and Thomas LaPlant and Thomas’ wife, Stephanie and children, Travis, Rachel, Bethany, and Caleb. Jerry was born March 22, 1937 in Homer, a small town in upstate New York to father, Orson LaPlant and mother, Dehlia Marshal LaPlant. He grew up in the same household with his six siblings, Loraine, Laura, Edward, Marion, Larry and Susan. Jerry left home after graduating from Homer Senior High to spread his wings and he chose to enter the United States Air Force. He always gave his all and rose to the rank of Maintenance superintendent as a SMSGT. While stationed at Travis Air Force Base and working a side job at the local bowling alley in Fairfield, California Jerry met his beloved Patty Jack Clark and they were soon married on Sept. 20, 1964. Jerry retired from the Air Force in 1981 and began working Civil Service for the Navy at Mare Island Naval Shipyard in Vallejo, California as a Production Engineer. After 13 years he eventually hung up his coat in 1994 to enjoy the good life in retirement. Along with raising their two boys Jerry and Patty built a successful life together of 48 years until Patty went on to be with the Lord in October of 2012. Jerry remained a widower, however, he found solace as he uprooted and replanted from Fairfield, California to McDonough, Georgia in 2014 to live out his remaining years with his sons and their families. Jerry was a very active and passionate participant in his local church. He was a leader, an encourager, a provider. He loved people and he loved the Lord. He was sharp, very intelligent and intuitive. He was a detail guy so you can count on him to have surveyed the project from every angle and make sure it was done exactly right. He loved to travel and see the world. He loved long road trips and would drive across different parts of the United States all by himself, golfing 18 holes every stop of the way. He and Patty loved to travel together. They loved their family and they are together again and will be missed by all who were touched by them. Funeral service will be held at 11 a.m. Friday, Feb. 4, 2022, at Liberty Church, 2641 N. Texas St., Fairfield, California. Graveside burial will follow at 1:30 p.m. at the Sacramento Valley National Cemetery, 5810 Midway Road, Dixon, California.

The family of Gerald Russel LaPlant created this Life Tributes page to make it easy to share your memories.