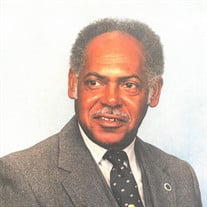 We invite friends and family that are unable to attend the service to click on the link provided to view the live stream on Tuesday 1/21/20 www.mcbcfs.org/ourmedia/livestream Frank C. Sanders March 1931 - December 2019 Frank C. Sanders,... View Obituary & Service Information

The family of Frank Cook Sanders created this Life Tributes page to make it easy to share your memories.

We invite friends and family that are unable to attend the service...

Send flowers to the Sanders family.