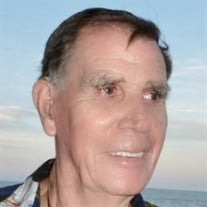 Francis Eugene Garner 1933-2020 Frank Eugene Garner passed away late Friday night January 17,2020 after a long battle with Alzheimer’s disease. Frank also known as Paco to family and friends was born to Alonzo and Jane Dryden Garner in Moran, Kansas on August 11,1933. Frank is survived by his loving and devoted wife of 63 years Judith Jane Garner of Vacaville. His brothers Lonnie Garner and Leroy Garner of Pueblo, Colorado and sister Mary Jane Garner Addington of Pueblo, Colorado. He also leaves behind His son Ronald and wife Colleen Garner; son Patrick Garner of Vacaville; and son Shawn Garner of Rising Sun, Indiana; and son Marc Araiza of Honolulu, Hawaii. He is also survived by his niece Ann Garcia of Petaluma, CA He is also survived by his five grandchildren Kurtis Garner, Michael Garner, Jesse Garner, Molly Wiley and Heather Araiza. Grandnieces Samantha and Taylor Garcia and two great granddaughters Maddison and Noelle Wiley. Frank leaves behind many lifelong friends that he also considered as family. Frank grew up in Colorado and attended high school in Florence and Moran Kansas where he was a star basketball player, and he was and avid basketball fan all throughout his life especially enjoying college basketball and March madness. In 1953 Frank was drafted in the Korean war, Frank served in the Army , 13th Infantry Fort Carson Colorado as a medic attached to a Green Beret cold weather Mountain Training Force. In 1956 Frank and Judy married and in 1960 they moved to Sonoma California, Frank became a Psych tech at Sonoma Developmental Center in 1961 and continued his education at SRJC in Santa Rosa and became a Registered Nurse. He also along with his wife Judy owned and ran the Rose Haven Rest Home in Sonoma for many years. Frank was very active in community service with several clubs such as being President of the Lyons club of Sonoma, President of the Sonoma Jaycees, President of the Sonoma Valley Optimist Club, President of the SRJC nurses’ association. Frank also belonged to the Sonoma Vintage Festival. In 1980 Frank retired from the Sonoma Developmental Center, and with his wife Judy traveled across the united states twice including Alaska. He loved to travel and traveled Mexico, Belize, Australia, Kenya and Tanzania. Frank and Judy retired to San Felipe, Baja Mexico on the Sea of Cortez and continued volunteer work there for 15 years. Frank was an artist and loved to paint and create shell art and was an avid reader. He loved to garden and feed birds and loved his cat Snoopy and absolutely loved ice cream. In April 2019 Frank relocated to Vacaville, CA. In his last months of life, he was a resident of VacaValley Living Memory Care Facility where he enjoyed participating in group field trips some of which included ice cream, country rides and going to a horse farm. Frank had a kind heart, a sincere smile and will be missed by many. The family suggests sending memorial contributions to the Alzheimer’s Association at www.alz.org/join_the_cause_donate.asp

The family of Francis Eugene Garner created this Life Tributes page to make it easy to share your memories.

Send flowers to the Garner family.