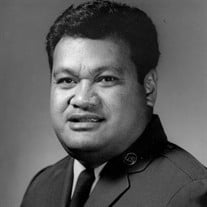 Faagalo Savaiki December 31, 1945 – November 26, 2019 Faagalo Savaiki, 73 died on November 26, 2019 surrounded by his family at David Grant Medical facility, Travis Air Force Base. Memorial service will be held on December 23, 2019 at 8:30a at Bryan Braker, Fairfield followed by a military burial at the Sacramento National Cementary in Dixon, CA. Faagalo Savaiki was born on December 31, 1945 in Pago Pago, American Samoa. Frank, as everyone called him, moved to Hawaii and finished high school and then joined the USAF and served his time in the Vietnam War. While he was on leave to visit his father back in American Samoa, he met the love of his life, Lonise. They married, started a family and continued his military career. Because of his career, his family traveled many countries, mostly Far East like, Philippines, Korea and Japan. Finally his last assignment brought the family to Travis AFB. He retired from the military in 1993. He continued working as civilian contractor until 2008, and retired. He is survived by his children, Elaine, David, and Reuben, grandchildren, Leah, Triston and Jocelyn. Proceeded by his beloved wife, Lonise Savaiki. Funeral arrangements under the care of Bryan Braker Funeral Home, 707-425-4697. You may sign the guestbook at www.bryanbraker.com.

The family of Faagalo Savaiki created this Life Tributes page to make it easy to share your memories.

Send flowers to the Savaiki family.