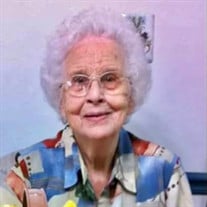 Esther Arlene Shoopman, passed away Tuesday, November 23, 2021, at the Hacienda Del Mar Care Home, in Suisun City. She was 100 years old at the time of her death. She was the second oldest child of Herbert and Capitola Rodgers. She had an older brother and three younger sisters, Virgil, Imogene, Cleo and Norma. She survived all of her siblings. On February 9, 1942 Esther married Harl Huston Shoopman in Rushville, Nebraska. Soon after marriage, Harl entered the Army and was serving in the European theater of World War II when their oldest son, Harl Huston Jr. was born. Esther worked a variety of jobs to help make ends meet while Harl was in the service. After the war Harl and Esther settled near Kimball, Nebraska, where they farmed and worked a variety of jobs. It was here that their second son, Thomas Roger, was born. In 1947 Harl had an opportunity to go to work in Los Alamos, New Mexico, as security for the Atomic Energy Commission laboratories. In 1948, their third child, Linda Lou, was born in Los Alamos. As a devote Christian from an early age Esther joined the First Baptist Church of Los Alamos, where she was very involved. In 1953 the family moved to Fairfield, California where Harl had started working at Travis Air Force Base as a civilian employee. They soon joined the congregation of the First Baptist Church Fairfield, were they continued practicing their faith. Both Harl and Esther made strong and lasting friendships throughout their church life. In 1955 their fourth and final child, Herbert Allen, was born in Fairfield. In 1959 Harl was transferred back to New Mexico, After a year living in Albuquerque they returned to Los Alamos and continued their close relationships there. In 1965 the family returned to Fairfield, where Esther continued raising their teenage daughter Linda and young son, Allen. She was a busy home maker and active church member. After Harl passed away in 1992, Esther remained in her Fairfield home until she moved to a care facility in her late 80s. During the period between Harl's death and her move to a care home, she worked for Fairfield-Suisun School district food services, for seven years. During the last four years of her life, she resided at the Hacienda Del Mar Care Home in Suisun City, she seemed to love her time there and the staff there loved her in return. She is survived by her four children, Huston Shoopman, Thomas Shoopman and his wife Janis, Linda Shoopman-Sorensen, Allen Shoopman, nine grandchildren, seventeen great grandchildren and one great-great grandchild. Also, very important to Esther was her grandson Derrick who preceded her in death in 2010, her favorite son-in-law Sam Sorensen, who preceded her in death in 2012 and her loving daughter-in-law, Nancy Shoopman (Allen's wife) who preceded her in death in 2020.

Esther Arlene Shoopman, passed away Tuesday, November 23, 2021, at the Hacienda Del Mar Care Home, in Suisun City. She was 100 years old at the time of her death. She was the second oldest child of Herbert and Capitola Rodgers. She had an older... View Obituary & Service Information

The family of Esther A. Shoopman created this Life Tributes page to make it easy to share your memories.

Send flowers to the Shoopman family.