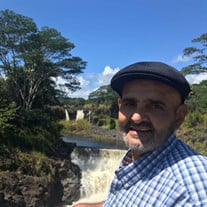 ERIC JOHN ESPINOZA AUGUST 12, 1962—FEBRUARY 26, 2022 Eric John “Johnny” Espinoza passed away on February 26, 2022, surrounded with love by his family and friends overlooking the hills at his home in Birds Landing. Eric was born on August 12, 1962, and grew up in Suisun and Fairfield, California. He was a 1980 graduate of Sam Yeto High School. He started his career working at Mare Island Naval Shipyard as a Pipe Fitter until the closure of the Shipyard. Eric then decided to become a Truck Driver, attending Truck Driving Academy in Sacramento. He worked for a few trucking companies before he decided to become an Owner Operator and bought his own truck to start Espinoza & Daughter Trucking. He would often talk about how many of the Bay Area freeways he helped pave. In 2006 he retired from truck driving and started working for the State of California, at California State Prison Solano as a Plumber. He left Solano in 2015 and went to work for Sonoma Developmental Center, until he found his home at Napa State Hospital as a Plumber. He loved every second of his time working at Napa, and often volunteered for overtime to help his coworkers. He retired from Napa State Hospital on February 5, 2022 In 1982 he met the love of his life, Susan. They wed on August 9, 1986, and the following year they welcomed their daughter Ericka. Eric was a gloating husband and father and very proud of their accomplishments. Eric’s favorite title of all was Pop. His grandchildren, Emma, and Johnny were the light of his life and there was nothing he loved more than spending time with them. You could find Eric on the ground wrestling with the kids, playing monkey in the middle, attending all their sports games, and giving them all his love. Eric lived a full vibrant life and was the life of the party wherever he would go. He loved fishing, concerts, camping, and traveling with friends and family. Most of all, he loved working on his property in Birds Landing. He enjoyed tending to his fruit trees, mowing the field with his tractor, splitting firewood, and doing a lot of home improvements himself. He was so proud of the beautiful life he created for his family. Their lives will never be the same without him. Services for our beloved Eric will take place on Friday March 11, 2022, at The Clubhouse at Rancho Solano from 1-4 PM. 3250 Rancho Solano Parkway, Fairfield, CA 94534.

The family of Eric John Espinoza created this Life Tributes page to make it easy to share your memories.

Send flowers to the Espinoza family.