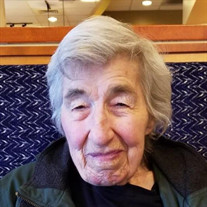 Elsie Eleanor Halsted January 23, 1920 – March 9, 2021 Elsie Eleanor Halsted passed away peacefully in her home on March 9th 2021 due to cerebrovascular disease. She was 101. The oldest of nine children, she was born to John and Vera Novodvorsky in St. Paul Minnesota. She is survived by her son Macklin, his wife Stella and their three children Nicole, Tatiana and Patrick. She was preceded in death by her husband Joseph (Mack) Halsted who passed away in December 1990. They were married 32 years. Elsie loved to garden. One of the first things she and her husband did to their home was to remove all the grass and build a set of terraces in the front yard so she could plant a garden. Soon after the front yard was transformed, most of the back yard was taken over with flower beds and just about every room in the house had plants on stands or hanging form plant poles. African Violets were a favorite of hers but almost any blooming plant caught her attention. Quite appropriately, her son has done almost the same thing to his house although he is fond of miniature trees. There was a place in her heart for all animals but Elsie was a cat person. There were never fewer than three and after her husband passed, sometimes as many as 5 or 6 running around the house. It didn’t take long before the word was out and most of the stray cats in the neighborhood knew they could get a meal and some shelter in Elsie’s backyard. She would make small shelters for them in the winter and if she could catch them, they would take a trip to the vet to get their shots and be spayed or neutered. Reading was another favorite activity of Elsie’s. She enjoyed going through the newspaper and finishing the crossword puzzle. She did this almost every day until she was 100 when her failing eyesight finally made it too difficult. Of course she liked novels that featured cats but she would also read murder mysteries and books about plants and travel. She loved her National Geographic subscription and would often spend hours going over maps of places she thought might be interesting to visit. Elsie was raised on a farm in North Dakota and eventually joined the Women’s Army Corps. She met her husband Joseph at the Army Language School in Monterey, CA. They were both stationed to Frankfurt Germany and were married in Basel Switzerland on December 17th, 1957. Their only son was born in Munich, Germany in 1958. Eventually they settled in Indianapolis, Indiana and both she and Joseph worked at Ft. Benjamin Harrison. He was in the Army and she worked as admin support for the Department of Defense. Together, they were very active in the Episcopal Church in Indianapolis. She sang in the choir for years and enjoyed her time with the ladies at the Thursday evening choir practices. She contributed many needle point projects to the church in the forms of kneelers and wall decorations. They also enjoyed attending the Indianapolis Symphony and the Indianapolis Reparatory Theater. Elsie was a strong and independent woman. She was shy and didn’t make friends easily and felt comfortable doing things her way. After her husband passed, she spent the next 25 years living by herself. Caring for her garden and the cats kept her going and her son’s good friend Tim would look in on her from time to time since Macklin was living in California. She would do morning exercises and eventually attended some exercise classes with Tim’s mother Fran. In 2006, Elsie moved to Fairfield, CA to be closer to her son and his family. She enjoyed their visits and looked forward to playing with their little dog and riding in the car. Her 100th year was marked by the Covid 19 pandemic and sadly she spent most of 2020 confined to her room. She passed away soon after her 101st birthday. Elsie will be interred at St. Albans Episcopal Church in Indianapolis as soon as it is safe to travel to do so. Arrangements are under the care of Bryan-Braker Funeral Home, 707-425-4697. You may sign the guestbook at www.bryanbraker.com.

Elsie Eleanor Halsted January 23, 1920 &#8211; March 9, 2021 Elsie Eleanor Halsted passed away peacefully in her home on March 9th 2021 due to cerebrovascular disease. She was 101. The oldest of nine children, she was born to John and Vera... View Obituary & Service Information

The family of Elsie Eleanor Halsted created this Life Tributes page to make it easy to share your memories.

Send flowers to the Halsted family.