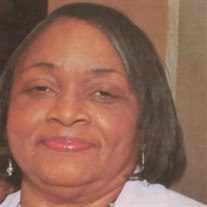 On July 14, 1941 in Lafayette, LA, Elizabeth Ann was born to Elton and Louise Jefferson. She was preceded in death by her parents, maternal grandparents Dupree & Celeste Levings ; paternal grandparents Junius Jefferson, Sr. and Georgeana Alexanders Jefferson. Elizabeth accepted Christ at an early age. She was born and raised in the Catholic Church. She converted to Baptist at the age of 62. Elizabeth was educated in Calcasieu Parish, LA school system where she graduated from Sacred Heart High School. She later received her teaching degree from Solano Community College in Fairfield, CA. She taught in many capacities in Fairfield-Suisun Unified School District and retired after over 35 years of faithful service. Elizabeth was well known for her excellence in educating her students and had a great passion and love for them. Her other passions included sewing, decorating, crocheting, traveling and shopping. She was a shopaholic and good at it. Elizabeth married John Wesley Jones, Jr. and from this union they were blessed with Treva Lorraine and Damon Wesley. After John’s death, she married Nathaniel Lomax, who also preceded her in death. Both loved her for the beautiful and strong woman she was. She was very classy, elegant and poised. Mrs. Chancellor is what she was called by her daughter Treva, which is based on a character on Liz’s favorite soap opera “The Young and the Restless”. She loved her family and friends wholeheartedly. She would be there whenever you needed her. Always bossing you and sharing her words of wisdom. She had a heart of gold. The praise and love that had for God showed in her life. She leaves to cherish her memory a daughter: Treva Jones Fisher of Richmond, VA; son: Damon W. (Jewell) Jones, Sr. of Bakersfield, CA; grandchildren: Damon W, (Rebecca) Jones, Jr. of Fairfield, CA, Dante N. Jones (U.S. Army), Me’Caila E. Fisher of Richmond, VA; great grandchildren: Miylah Jones, and Diylan Jones of Fairfield, CA and Charlye Davis of Richmond, VA; sister: Celeste Williams of Lake Charles, LA; three nephews, three nieces, a host of great nieces and nephews; one great-great nephew; devoted family members Kernist and Brenda Jacobs, Bertha Golbert of Lake Charles, LA; Johnnie Rowley and family of Vacaville, CA; a host of friends, among them devoted, Connie M. Lubin and Patricia Triplett of Lake Charles, LA, Edward Buchannan of Vacaville, CA, Tanya Colbert of Fairfield, CA, Vera Banks of Arizona, Reginald Jackson of Georgia and Carol Baglin of Pennsylvania…fondly call Sammy Jo by Liz.

The family of Elizabeth Ann Lomax created this Life Tributes page to make it easy to share your memories.

Send flowers to the Lomax family.