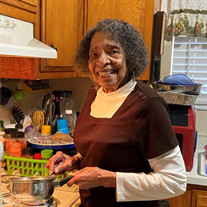 God called home One Special Amazing Angel Our "Queen" Elizabeth Hogue. She was born on August 29, 1937 in Shelby, North Carolina. She transitioned Peacefully at home with her family. She was the youngest and only daughter of the late Lawrence P. Mc Dowell and Mamie Young McDowell. Elizabeth accepted Christ at a young age. She joined St Stephens CME Church in 1973 under the leadership of the late Founder Rev. Joseph B. Davis. She was the Minister of Music for 26 years. She married the love of her life Lyent C. Hogue Sr. in 1956. She had two sons in 1959 and 1960 in Shelby, NC then her husband got stationed at McKinley Air Force Base in Bermuda where she had her first daughter in 1962. Then in 1964 she had her second and last (child) daughter in Sumter, SC. They traveled a lot being a Military family. In 1972 they were stationed at Travis Air Force Base and her husband retired in 1975 and moved to Fairfield. Elizabeth worked on base for 9 years as a housekeeper at Billeting. Then she went on to work as a Supervisor of Enviromental Services for 22 years at Care West La Mariposa Convalescent Home where she retired in 2003. Elizabeth loved and enjoyed playing her piano and organ for all occasions. She had a Beautiful smile with a Big Heart. She was an Amazing wife, mom, grandmother, aunty, cousin. friend and Human Being. She was very supportive of her children and grandchildren. Always the number one cheerleader. She Truly Loved the Lord and her family and extended family. She would always say " Put God First in all you do, because God is Good All the Time." Always would tell us to Pray About It! With Incredible LOVE and RESPECT she was "Mama" or Momma Hogue to Everyone. She will Truly Be Missed! She was preceded in death by both parents, brothers James Edward and Melvin Lee McDowell, sister in love Elsie Freeman McDowell, sister Sadie Harris, son Lyent C. Hogue Jr., granddaughter Elizabeth CM Joseph, great grandson Sir Maverick Hogue and Beloved Husband Lyent C. Hogue Sr. Elizabeth is survived by her son William Larry Hogue (Lucilia) daughters Deborah Lynn Hogue-Pettus (Vincent) and Karen Hogue. Grandchildren La Quitia, Marques, Tamsen (Kevin), Durrell, Ashley, Merissa, Alexia, Sandra (Daniel), Andrea (Richard), Micaella, Shyanne, Micheal, Shawnese, Savanna and Derek (Keisha) 24 Great Grandchildren. Five Special Lifetime Sister Friends Mary Hanna, Beatrice Henderson, Annie Richardson, Nancy Duenas, and Mable Polk. Numerous Nieces, Nephews, Cousins, and a Host of other Loving relatives and friends whom she loved Dearly.

God called home One Special Amazing Angel Our "Queen" Elizabeth Hogue. She was born on August 29, 1937 in Shelby, North Carolina. She transitioned Peacefully at home with her family. She was the youngest and only daughter of the late Lawrence... View Obituary & Service Information

The family of Elizabeth Hogue created this Life Tributes page to make it easy to share your memories.

Send flowers to the Hogue family.