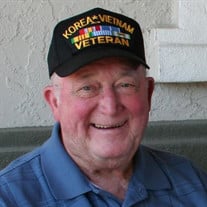 Edward “Robbie” Robertson passed away Friday January 31, 2020 at the age of 87 in Roseville, California. Edward better known to many as “Robbie” was born in Fondue, Kentucky to Josie and Marion Robertson. Edward was the youngest of six children; Madge, Beatrice, Marion Jr., Viola, Juanita and Edward all were raised in Knoxville Tennessee. Edward came from humble beginnings’ the son of a Coal Miner he learned early how to work hard and support his family. Edward was a Christian man who loved to sing in the local Baptist choir. At the age of 15 Edward joined the Navy; this is where he got his nickname “Robbie” while serving on The USS Newport News (CA148) Heavy Cruiser. After two years of service he left the Navy and joined the Air Force Security Forces serving in both Korea and Vietnam during his 20 year career. During his time stationed in Japan he was a member of the Masonic lodge where he became Master of his lodge in The Yokota orient of Japan, and later joined the Fairfield Masonic Lodge. Robbie was proud to serve in the military and remained diligent in the oath he took to serve and protect and decided to retired from the service in 1975. In 1960 while stationed at Travis Air Force base he met and married his wife Mary A. Baracosa of 59 years. Robbie and Mary had two children Faith Ann and Bryan. Robbie loved animals and had several during his lifetime. Robbie was a very devoted father and husband and loved his extended family and friends. Edward is survived by his wife Mary, daughter Faith Ann (Lincoln CA), son Bryan (Knoxville TN), Grandson Bryce (Knoxville TN), nephews Ron Mouser (Knoxville, TN), Michael Stauffer (Marietta GA), nieces Pamela Moore (Knoxville TN), Brenda Mouser Birkins (Greenville TN) and Great nephew Shane Moore of (Canton, GA). Robbie has a long list of Baracosa nephews and nieces and extended family. Funeral Details: to be held Tuesday February 18th, 2020 Bryan- Braker Funeral home 1850 W. Texas St. Fairfield, CA 94533 Viewing: 9:30 am- 10:30am Service: 10:45- 11:45 Burial: 1:00pm Sacramento Valley National Cemetery (exit 60 Midway Rd.) 5810 Midway Rd. Dixon CA 95620 Reception to follow: 5778 Dixon Ave, Dixon, CA 95620 In lieu of flowers contributions may be made to: Smoky Mountain Service Dogs www.smokymountainservicedogs.org List in note section: In Memory of Edward Robertson. By Check; mail to: Smoky Mountain Service Dogs 110 Tooweka Circle, Loudon TN 37774

The family of Robbie Robertson created this Life Tributes page to make it easy to share your memories.

Send flowers to the Robertson family.