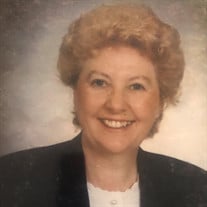 Dorothy Gladys Scott passed peacefully, and surrounded by her loving family, in her Vacaville home on June 5, 2021. Dorothy, fondly known as Dottie, was born on August 16, 1939 in Bowling Green, Kentucky to Carl E. Goodrum and Essie E. (Sherry) Goodrum. Her father was a tobacco farmer during the Great Depression. She moved with her parents to California in 1942, where she graduated from Vallejo High School in 1957. She went on to marry Beldon Charles Scott on October 10, 1958, who preceded her in death on January 15, 2021 after 62 years of marriage. Dottie was a loving, kind, strong, determined, creative and giving wife, mother, grandmother, great grandmother, and mother-in-law. She was an incredibly gifted artist especially with charcoal, pastel and oil painting. Dottie also enjoyed sewing, crocheting, doll making, and creating beautiful stained-glass designs. She dabbled in Real Estate after passing her test (on the first try!) and earning her license in 1995. Although Dottie was a wonderful grandmother to her own grandchildren, many others referred to her as “Grandma Dottie” too. Dottie expressed her love of children though the Vacaville TGIF afterschool programs where she worked for several years. She was always well liked for her kindness and willingness to engage in a game of Phase 10, run around the playground or spin on the tire swing. Grandma Dottie will always be remembered by her ‘kid at heart’ spirit. Loving mother of Charles (Valerie) Scott, Carl Scott, Chris (Linda) Scott, Cynthia Scott, and Corey (Annabelle) Scott. Proud grandmother of Sean (Holly) Scott, Angele (Chris) Oliver, Jaclyn Scott, Brittini LaDart, Ashlynn (Brad) Depew, Dayna Scott, Connor Scott, and Denna Scott. Great-Grandmother of Liam, Audrey, Aniya, Elijah, and Ryker. Sister-in-law of Francis and her late husband Julius N. Jacobsen. Also survived by many nieces, nephews, extended family members. Dottie had a special place in her heart for her longtime friends Roger and Gale Waterman, George and Sandy Fulton and caregivers, Alisa and Jasmine. Dottie and her family extend a special thanks to Kindred Hospice for their care and compassion.

The family of Dorothy Gladys Scott created this Life Tributes page to make it easy to share your memories.

Dorothy Gladys Scott passed peacefully, and surrounded by her...