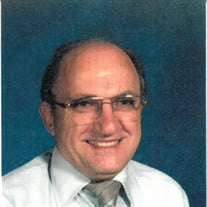 Donald Stasi 1934-2021 Don was born to Mary and Joseph Stasi. He was raised in Santa Clara with four younger brothers. He graduated from Santa Clara Union High School. He received a Bachelor of Science in Chemistry from San Jose State College. Don served in the U.S. Army for two years. He returned to San Jose State to start his master’s program in chemistry. Don wrote in an unpublished autobiography: “But after a careful examination of my future aims, I decided that teaching might be a more rewarding field of endeavor. This belief is reinforced by the knowledge that I shall be dealing with people not just chemicals.” In order to achieve his ambition, Don pursued a teaching career. He earned a teaching credential, a Master’s Degree in Educational Administration and an administrative credential. Don shared his love of science with generations of students. His teaching career began at Ukiah Unified School District for five years and continued at Vanden High School in the Travis Unified School District for 34 years until his retirement. Don was a beloved teacher and was selected Solano County Office of Education Teacher of the Year. He was nicknamed “Showman of Science” by the Fairfield Daily Republic. He taught students by “hamming” up experiments. He was quoted, “Science teachers are like showmen.” Don was a member of many professional and environmental organizations. He received a lifetime membership to the National Science Teachers Association. A friend to animals, Don was also a longtime member of the San Francisco Zoo and Gardens. Don was an avid reader and ardent fan of science fiction. Peanuts was his most enjoyable comic strip with Charlie Brown and Snoopy being his favorite characters. Don also loved to travel. He and his wife Rita enjoyed going to Reno for Hot August Nights, Las Vegas and Hawaii. Don and Rita made many friends on cruises that took them to Mexico, Alaska, Europe, Cuba, the Polynesian Islands and a 58-day cruise to South America in January 2020. Don passed away from a head injury due to a fall. He was predeceased by his parents and two brothers, Richard and Albert Stasi. Don leaves behind his wife Rita of 31 years, his brothers Joseph and Charles Stasi, four nieces and one nephew, four grandnieces and six grandnephews, two great-grandnieces and three great-grandnephews. Don loved God, his wife, family, friends, students and pets. He was also loved in return. May he rest in peace. In lieu of flowers, remembrances may be made to First Armenian Presbyterian Church, 430 S 1st St., Fresno CA 93702, (559) 237-6638, St. Mary's Parish, 350 Stinson Ave., Vacaville, CA 95688, (707) 448-2390 or your favorite organization. Services will be held graveside in Fresno. Senior Pastor Greg Haroutunian will officiate.

Donald Stasi 1934-2021 Don was born to Mary and Joseph Stasi. He was raised in Santa Clara with four younger brothers. He graduated from Santa Clara Union High School. He received a Bachelor of Science in Chemistry from San Jose... View Obituary & Service Information

The family of Donald John Stasi created this Life Tributes page to make it easy to share your memories.

Send flowers to the Stasi family.