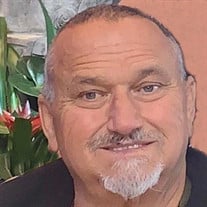 Donald James Gardiner February 7, 1961 - March 26, 2020 Donald James Gardiner, 59, passed away on Thursday, March 26, 2020 at his home in Fairfield. Don was born February 7, 1961 in Rhode Island to Pardon and Elsie Gardiner. Donald was the youngest of thirteen children. Don married the “Love of his Life”, Clara Laa, 32 years ago on May 28th. Don worked as an Electronic Technician at Telstar for 30 years, retiring after suffering a stroke in 2014. Don enjoyed life. He loved the Lord and looked forward to worship every Sunday. Prior to his stroke, he was an avid outdoorsman. Most importantly, Donald was a Husband, a Father, and a Papa that loved his family immensely. Don was truly loved by his family, his many friends, and colleagues. Don loved telling jokes and making people laugh. He enjoyed listening to music, singing, and dancing. He loved watching movies and quoting his favorite lines. Don loved to eat, figure out puzzles, play games, and create football pools. He loved attending his son’s baseball games and going to Chuck E. Cheese with his grandson he adored. Donald enjoyed spending time at Bodega Bay and loved his dogs. Don is survived by his wife, Clara “Sissy” Gardiner of Fairfield; one daughter, Mickie Gardiner; one son, Donnie Gardiner, both of Fairfield; one grandson, Lucas, of San Francisco; five sisters (Joan, Shirley, June, Jane, Judy) and five brothers (Gene, Gismo, Robert, Jimmy, John), and numerous nieces and nephews. Don was preceded in death by his parents and two brothers (Eddy and Walter). There will be no services at this time due to the current world crisis. We will plan a “Celebration of Life – Memorial Service” and interment for a future date.

The family of Donald Gardiner created this Life Tributes page to make it easy to share your memories.

Send flowers to the Gardiner family.