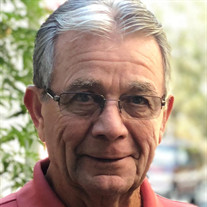 It is with great sadness we announce the passing of Dennis Prusso, 76, at his home with his family by his side, on Saturday, March 7, 2020 after a short illness. He was born Nov. 5, 1943 in Albany, California to Seymour and Beatrice Prusso. He was a lifelong resident of Fairfield as his parents moved here when he was one year old. He attended Fairfield Elementary School and was an Armijo High School graduate with the class of 1961. He attended Napa Junior College. He was in the National Guard and later transferred to the Air Force Reserves where he served for many years. Dennis worked in the family business, Skip’s Cycle and Mower Shop, in Fairfield, for over 25 years selling Schwinn Bicycles and Lawnmowers. After they sold the business, his love of cars, especially 'Chevy’s', led him to his successful career of selling cars at Woodard Chevrolet in Fairfield, where he sold many cars and trucks to his friends and family for over 20 years. He also worked at Vacaville GMC and Shellworth Chevrolet, both in Vacaville, for a 30 year career in car sales. After he retired his time was spent on the golf course playing golf with his friends and watching his beloved San Francisco Giants with Judy. Dennis will be so missed by his wife and best friend, married 55 years, Judy; sons, Mark and Michael; brother, Richard, all of Fairfield; sister-in-law and brother-in-law, Linda and Bob Fry of Redding; he was the beloved grandpa of, Elissa, Samantha, Brandon and Alexis Prusso; they were the loves of his life and he was so proud of them; nieces, nephews, cousins and many close and dear friends; and his puppy, Bella. He was preceded in death by his parents, Seymour and Beatrice Prusso; and daughter-in-law, Renee Prusso. The family will have a private service for Dennis at the Sacramento Valley National Cemetery in Dixon. A Celebration of Life will be held at a later date. Always in our hearts.

It is with great sadness we announce the passing of Dennis Prusso, 76, at his home with his family by his side, on Saturday, March 7, 2020 after a short illness. He was born Nov. 5, 1943 in Albany, California to Seymour and Beatrice Prusso.... View Obituary & Service Information

The family of Dennis Edward Prusso created this Life Tributes page to make it easy to share your memories.

It is with great sadness we announce the passing of Dennis Prusso,...

Send flowers to the Prusso family.