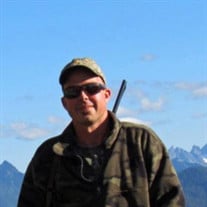 DAVID ALEXANDER MCKENZIE Dec. 26, 1979 — Dec. 22, 2019 David Alexander McKenzie passed away on Sunday, Dec. 22, 2019. David or Mac, as he was called by close friends, was born on Dec. 26, 1979, to Jim and Annette McKenzie of Vacaville, California. David lived many years of his adult life in Gold Bar, Washington. He was a resident and worked at Skyland Ranch where he was treated like family. He loved taking people on trail rides and was happiest when riding his horse Trapper. He also worked as an EMT with the local fire department. He lived the last several years in North and South Carolina where he worked in the food and restaurant industry as a waiter, cook, chef and caterer. He loved good food and loved cooking Southern dishes for friends and family. David was a grateful member of AA. He was an avid hunter with his father Jim and “grandpa Bruce”. He also spent a lot of time golfing or on the ski slopes. He was a member of The Church of Jesus Christ of Latter-day Saints. David is survived by his devoted brother and sister-in-law, Scott and Kristin McKenzie of Vacaville; his loving sister and brother-in-law, Julie and Per Axelsson of Djursholm, Sweden; niece and her husband, Katherine and Parker Itow and their son, Jack Palmer Itow; four nephews, Trevor and Derek McKenzie of Vacaville and Marcus and Lucas Axelsson of Sweden; and his forever friends, K.C. Letterman and Raleigh Demers and their daughters, Aubrie Belle and Kellie Rae Demers of Gold Bar, Washington; and many cousins, aunts, uncles and devoted friends too numerous to mention. David was proceeded in death by his paternal grandparents, Claude and Carol McKenzie of Napa, California; maternal grandparents, Ruth and Verl Taysom of Napa; and his uncle, Donald Taysom of Oregon. Private services are pending.

The family of David McKenzie created this Life Tributes page to make it easy to share your memories.

Send flowers to the McKenzie family.