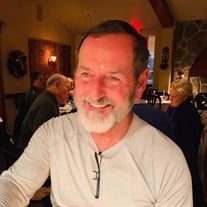 David Lane, 68, passed away Wednesday, November 13, 2019, at his home in Fairfield, California. David was born on December 9, 1950, in Lakeland, Florida, to Warren and Florence (Pestell) Lane. He married Cathy Shanit on April 24, 1993. David worked as an Information Technology and Training Manager for over forty combined years at Digital Equipment Corporation in Massachusetts, and Sun Microsystems and Cisco Systems in Silicon Valley. He proudly served in the U.S. Navy for eight years as a weapons officer on the U.S.S. Benjamin Franklin nuclear submarine during the late 1960’s and early 1970’s. David enjoyed hiking with his friends and his dog, Annie, spending time with his family on cruises or hanging out with his grandsons at Santa Cruz, and visiting with his family in Florida. He is survived by his wife, Cathy, of Fairfield; daughter Candace and son-in-law, Brian, and grandsons Liam and Quinn McMullen of Tabernacle, New Jersey; sister and brother-in-law, Jeanine and John Massoud, nieces Chelsea and Melanie of Fairfield; and beloved mother-in-law, Donna Shanit of Worcester, Massachusetts. He is also survived by his brothers Warren and Raymond Lane; and sisters Gerry Talbert, Margaret Hallman, Barbara McCoy, and Sandra Rumore, and many sister and brother-in-laws, and nieces and nephews in Lakeland, Florida. He was preceded in death by his parents, and sister Linda (Bonds) and brother Fred Lane. A private memorial service was held on November 19, 2019 at Bryan-Braker Funeral Home in Fairfield. Arrangements are under the direction of Bryan-Braker. You may sign the guest book at www.bryanbraker.com

The family of David Alan Lane created this Life Tributes page to make it easy to share your memories.