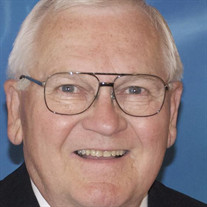 David Lee Allard “Dave” died peacefully in Fairfield, CA on November 30th at age 83. In light of Dave’s strong faith, he anticipated and enjoyed his life to the fullest, just as he enjoyed the anticipation of his death. He hoped that his joy was contagious at both ends of the journey. Dave was born on March 23, 1936 in Wausau, Wisconsin. Second to the youngest of five, he considered his childhood to be ideal. Three weeks after graduating from Wausau High School in Wisconsin, Dave was sworn in with the US Naval Academy class of 1958. After Induction Day, the adventure was on! Dave’s 4 years at USNA were overwhelming at the beginning, but then magically sped by. Those were very good years. Dave graduated with distinction; after which he reported to Pensacola. On July 4, 1959, four months before completing flight training, Dave married Barbara Anne Bohmer in St. Cloud, MN. After receiving his “wings of gold” that November, he and Barbara reported to Anti-submarine Helicopter Squadron 8 out of Imperial Beach, CA, just in time for the squadron’s Christmas party. They enjoyed 3 1⁄2 wonderful years with HS-8. Dave and Barbara’s active duty years were prolific too: son Stephen Patrick and daughters Elizabeth Ann and Catherine Louise were born at the Balboa Naval Hospital between May 1960 and May 1963. Dave left the navy in June 1963 and returned to the midwest where he joined a small General Motors division in Milwaukee. After 5 years with GM, he moved his family to the Monterey Peninsula where Dave joined 2 classmates and others in forming a financial services business. Son Michael Lee had been born in 1967 in Detroit just before the move. Amy Maureen was born in Monterey in 1975. In October 1973, Dave was the first person to receive the Certified Financial Planner (CFP)® professional designation. In 1987, he earned an M.S. Management degree from the American College. Dave was also heavily involved and respected in his church community and several charity organizations on the peninsula. Dave enjoyed volunteering with not for profit organizations in the Monterey area, including chairing the Monterey Peninsula United Way campaign, the Central Coast YMCA Board, the Monterey Bay Aquarium and his parish’s parish and finance councils. Dave always appreciated his family years in Carmel Valley where he and Barabara raised their five children: Stephen (Walnut Creek), Beth (Sacramento), Katie (San Luis Obispo), Michael (Corralitos), and Amy (Reno). Those years were filled with swim meets, baseball, and ballet. After 42 special and memorable years with family and dear friends in Carmel Valley Village, CA, Dave and Barbara moved to Paradise Valley Estates, a continuing care retirement community in Fairfield, CA, where their happy lives continued seamlessly. Dave understood and appreciated that his life was filled with blessings. He was born with a very strong faith, for which he thanked his mother. His marriage to Barbara was his lifelong anchor; their 5 children proved time and time again to be their own rewards. And Dave and Barbara’s 12 grandchildren were delightful gifts of fun and joy. Dave will be remembered as a vibrant, positive, honest man who touched many lives in his 83 years.

David Lee Allard &#8220;Dave&#8221; died peacefully in Fairfield, CA on November 30th at age 83. In light of Dave&#8217;s strong faith, he anticipated and enjoyed his life to the fullest, just as he enjoyed the anticipation of his death.... View Obituary & Service Information

The family of David Allard created this Life Tributes page to make it easy to share your memories.

Send flowers to the Allard family.