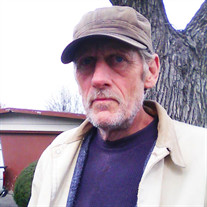 DANIEL JOSEPH MCFADDEN April 17, 1959 — March 5, 2020 Daniel Joseph McFadden was born on April 17, 1959 to parents Shirley T. 'Mac' and Marcella (Schrandt) McFadden in Lincoln, Nebraska. He passed away on March 5, 2020, at NorthBay Hospital after suffering with a heart ailment for many years. Danny was born into an Air Force family and joined six older sisters when he entered the world. Before his first birthday, the family traveled to Fairbanks, Alaska via the Alcan Highway for Mac’s next assignment at Ladd AFB. When Danny was 18 months old his only brother, Johnny was born and the two were intertwined for life. (They were championship pool players and held the record for most tournaments won locally for many years.) After Alaska, the family followed Mac’s duty assignments to Travis AFB and then spent three years at Bitburg AFB in Germany. There another sister was born, the last of nine siblings. At Mac’s retirement in 1965, the family returned to their home in Fairfield, California and Danny resided in Fairfield from age six till his passing at 60. One of Danny’s most enjoyable passions in life was fishing, especially at Grizzly Island. He would then excellently prepare the fish he caught and always shared his catch with family and friends. Danny was a great cook. He loved being outdoors and no matter the task, he was a dedicated and hard worker. He was previously a sheet metal worker and for a time operated an auto repair shop. He cared for his parents as they became elderly and was always ready to help those with a need. He believed being truthful and honest were values to live by. Though at times he could appear a bit gruff, he has left a deep sadness in his passing. He had a quick smile and a quirky sense of humor. Surviving him are his mother, Marcella McFadden; seven sisters, Kathleen (Vernon)Hague, Shirley Ann (Dave) Scrivner, Janet (Dennis) Retzloff, Nancy Aldrich, Mary Jane McFadden, JoAnn Perrin and Deborah McFadden; and many beloved nieces and nephews. Danny was preceded in death by his nephew, Jerrad Perrin; grand-nephew, William Scrivner II; father, S.T. Mac McFadden; brother-in-law, Bob Perrin; and his younger brother, John Patrick McFadden. Thank you for kindness shown to our brother, Danny throughout his life and those who tended him in the last weeks of his life. Gratitude especially to Danny’s friend Marco for all your care and devoted friendship. A visitation with a hosted reception will be held from 3 to 5:30 p.m. Thursday, March 12, 2020, at Bryan-Braker Funeral Home, 1850 W. Texas St., Fairfield, California. Arrangements under the care of Bryan-Braker Funeral Home, 707-425-4697.

The family of Daniel Joseph McFadden created this Life Tributes page to make it easy to share your memories.

Send flowers to the McFadden family.