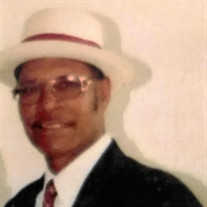 CROSETTI SPEIGHT Sept. 16, 1940 – June 2, 2020 Crosetti was born September 16; 1940 in Fairfield, Alabama to Arthur and India (Belcher) Speight. He was 79. He worked as a Transit Driver for San Francisco Municipal Railway for 24 years. He had so many stories to tell about the different people that rode his bus. Many of the friends told him he should write a book. Crosetti dedicated his life to Jehovah God in 2005. He enjoyed many privileges such as working at the Fairfield Assembly Hall, Attendant at Assemblies and Conventions, Assisting with the Pioneer School set-up. Crosetti was loving, giving and very outspoken. He was always willing to help others, which is something we all admired. He was also sports connoisseur. He was familiar with all sports, and although he didn’t remember all of players name he would call his beloved wife “babe” or “Brenda” to help him recall. This was one of the main topics he would talk about with his sons Crosetti, Jr., Clinton, Clifton and friends. We will all miss him. Crosetti is survived by his loving wife of 38 years, Brenda Speight. Also survived by his sons Crosetti Speight, Jr., Stockton, CA, Clinton Speight, Fairfield, CA, Clifton Speight, Fairfield, CA and one daughter Nicole Lewis, Pittsburg, CA. Sisters Maxine Lee, Detroit, MI, Loretta Cates, Orlando, FL, Myraette Speight, Detroit, MI, Patricia Nolan, Detroit, MI. Grandchildren Penny Speight, Clinton Speight, Jr. Caylee Speight and Korey Speight. One Great Granddaughter Sasha Speight, and a host of caring family and friends. He was preceded in death by his parents, Arthur Mack and India Speight, his sisters Jean Daniel and Sylvia Biddle, and his brothers Hakim F. Ber’ah and James E. Speight. Memorial services will be June 27, 2020 1pm via Zoom video conferencing. The family wish to acknowledge with deepest appreciation the great outpouring of love that we have received from our family and friends. Arrangements are under the direction of Bryan-Braker, (707) 425-4697. You may sign the guestbook at www.bryanbraker.com

The family of Crosetti - Speight created this Life Tributes page to make it easy to share your memories.

Send flowers to the Speight family.