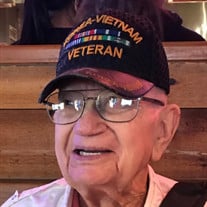 Clifford (Cliff) Wilbur Semmler Sept. 12, 1933 – Mar. 25, 2020 Clifford W. Semmler passed away peacefully at his home in Fairfield, California, on Wednesday, March 25, 2020 at the age of 86. Clifford was born on Sept. 12, 1933 in Roscoe, South Dakota to Arthur and Bertha Semmler. He married his sweetheart and partner in life, Irma Semmler, on May 16, 1954. They resided in their home together until October 2, 2015, when she passed away. Clifford continued to live in their home until his recent passing. During his life, Clifford served in the U.S. Airforce, for 20 years, as a Military Police. He served in both the Korean and Vietnam wars. After retiring from the U.S. Airforce, he joined the Solano County Sheriff’s Department as a Correctional Officer where he worked until he retired. Clifford loved anything that involved to do with the outdoors. (Camping, Fishing and Hunting). His other passion was bowling. Cliff and Irma would travel all over to participate in different tournaments as well as joining several leagues. Clifford loved to cheer on and support his children, grandchildren, and great grandchildren. Cliff will be remembered for his deep devotion and love for his family. Clifford is survived by daughter/son-in-law, Cynthia and Mark Sottana of Vallejo; son Curtis Semmler of Vacaville; three grandchildren, Christopher Mann and wife Ann of Suisun City, Cheryl Morgan and husband Scott of Vacaville, Nicholas Semmler of Vacaville; four great grandchildren; Abigail and Brady Mann, Rebecca and Mackenzie Morgan. Clifford is preceded in death by his wife Irma F. Semmler; parents Arthur and Bertha Semmler; brother, Elmer Semmler; sister, Norma Schneider. At his request, no funeral services are planned. Inurnment will be private in Fairmont Memorial Park. In lieu of flowers, memorial contributions may be made to the COPD Foundations at www.copdfoundation.org ; National Kidney Foundation at www.kindey.org or the Prostate Cancer Foundation at www.pcf.org. Arrangements are under the care of Bryan-Baker Funeral Home. You may sign the guest book at www.bryanbraker.com

The family of Clifford Wilbur Semmler created this Life Tributes page to make it easy to share your memories.

Send flowers to the Semmler family.