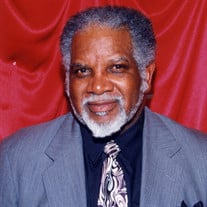 On July 19, 2019 our lord and savior welcomed Charles Manza Johnson into his loving arms. Charles is survived by his wife of 62 years, Geneva I. Johnson, 4 Sons: Charles Johnson, Jr, William Johnson, Jerome Johnson and Antoine Anthony Johnson, 3 Grand Children: Jayce, Aaliyah & Alyssa (illiana), 2 Great Grand Children: Jazmyne & Jazelle. Charles and Geneva met in high school; Brooklyn, New York in 1952. Charles Joined the US Air Force in 1956. He fought in Vietnam War and retired honorably in 1980 at Travis Air Force Base. Eventually, Charles went to work for a private bay area company and later went to work as a quality control inspector for NASA & other critical departments of the federal government. He retired from that position after 20 years. Charles has been a resident of Fairfield since 1971. Charles was strong member of the Tri-City Elks, holding multiple titles within the organization over the past 40 years. Charles was also well known throughout the Fairfield community because he was a referee/umpire for multiple sports…high school, college and city intermural sports throughout the county. (1971 to 1982) His viewing will be held on Monday, August 12th from 4:00PM-8:00PM and a chapel celebration of Charles’ life will be on Tuesday, August 13, 2019 @ 10:00AM. Both events will be held at the Bryan-Braker Funeral Home Chapel, 1850 W. Texas Street, Fairfield, CA 94533. The chapel service will be followed by a procession to the Sacramento Valley National Cemetery, 5810 Midway Road, Dixon, CA 95620. Charles will be given a veteran military burial ceremony at 12:30PM. After the service (Around 3:00PM) there will be a re-pass celebration at the Tri City Elks Lodge #1662, 566 Parker Road, Fairfield, CA 94533 (707) 437-3322

The family of Charles Johnson created this Life Tributes page to make it easy to share your memories.

On July 19, 2019 our lord and savior welcomed Charles Manza Johnson...

Send flowers to the Johnson family.