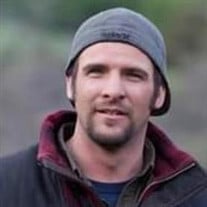 Chad Glashoff October 28, 1983 – October 18, 2020 It is with a heavy heart that we must share the loss of Chad Glashoff, 36, of Suisun Valley, A caring young man of many talents, an artist, a sculptor of large metal art, and descendant of a pioneer family, lost his life Sunday, October 18, 2020. Chad was born to a life on the road, with a deep connection to the Suisun Valley and the developing Sculpture Ranch. The natural beauty of the valley inspired Chad and cradled his artwork throughout his life. Chad lived with his father in a variety of living situations throughout his childhood, which were some of his fondest memories. Shacks, trailers, and hotels were considered home as a child, a lifestyle Chad embraced. One yarn he loved to recall was living in a shack during an El Niño when it rained for 28 days straight. There was no clothes dryer, clothes were hung on the rafters to dry. They never dried. Animals and livestock were always a huge part of Chad’s life. The ranch collected a menagerie of beasts: Big dogs, llamas, cattle, donkeys, horses, and zebra. Chad took it upon himself to create special bonds with specific 4-legged friends: a dog named Poe, a calf named Roja. Animals grounded him. Upon graduating from Armijo High School in Fairfield and in pursuit of higher education, Chad attended the California College of the Arts in Oakland/Berkeley. There he networked with masters of various artistic media and was especially drawn to painting, ceramics, and sculpture. His favorite artist was Kandinsky, a Russian painter and art theorist. Upon completing his chosen coursework, Chad immediately joined his father on the road. He became an instant highlight of street shows with his stainless steel abstractions. He loved the adventure, diversity, and eccentricities of street shows and art-loving clients. Chad was a natural. But along with chasing art venues throughout the West Coast came the hardships of sleeping in trucks, flat tires, blown engines, road food, and porta-potties. Chad embraced the ride. As Chad’s career in sculpting progressed, he became immersed in and influenced by spirituality, creating timeless images of past and present spiritual icons. It was not only a change in style, but mirrored his own personal progression. Chad’s outlook became all about love and searching for the undefined truths of the Universe. Chad’s Earthly loves were his friends in Suisun Valley, art shows, his artist comrades on the road, and his animals. One wonders what beauties would have come next. We will always wonder. Chad was a blue-eyed shining light, traversing across the Earth on an elevated plateau.” Just passing through.” Sadly, although Chad had many friends and touched so many lives, due to the current pandemic restrictions any event to celebrate Chad’s Life will be private and limited to family and a few invited guests. Arrangements have been entrusted to Bryan-Braker Funeral Home 707-425-4697.

Chad Glashoff October 28, 1983 &#8211; October 18, 2020 It is with a heavy heart that we must share the loss of Chad Glashoff, 36, of Suisun Valley, A caring young man of many talents, an artist, a sculptor of large metal art, and descendant... View Obituary & Service Information

The family of Chad Glashoff created this Life Tributes page to make it easy to share your memories.

Send flowers to the Glashoff family.