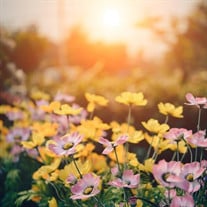 Carmela Cradduck September 7, 1924-December 23, 2021 Carmela Cradduck, affectionately known to many as Nonnie, was born in Naples, Italy, on September 7, 1924. She lived a long and dedicated life; a life committed to her strong moral compass, her intense love of family, her husband, 3 children, 7 grandchildren and 13 great grandchildren, and certainly, a life-long devotion to (La Madonna del Carmine),Our Lady of Mt. Carmel. Lina’s 97 years were full of learning, growth and discovery. She grew up in the city of Naples, surrounded by a close, loving family, endured WW2 as a teen and attended the University of Naples, graduating with a diploma in Teaching and English. In 1946, she worked as a translator for U.S. forces in Naples, where she met Jack, a handsome young service man whom she married. She left her family to come the the United States, where she became a citizen. Three children were born in Florida, and from there, the military life took the family to several other states, England and fortuitously, back to Naples, Italy. They spent four wonderful years enjoying time with her parents, siblings and extended family. In 1966 they were transferred to Fairfield, California where later, Jack retired from Travis AFB. Since then, the town has been Lina’s home, for 55 years. Throughout the years, Lina embraced, and immersed herself in the diverse culture of each town and city in which they lived. People she met became lifelong friends; friendships she maintained from afar over decades. Teaching preschool in Texas and in California, she touched many lives with her warmth and wisdom. Lina loved her garden of herbs and flowers, cooking and baking, keeping her Italian heritage and traditions at the forefront of her life, to the delight of those who sampled her Pastierra and Bolognese Sauce. Honoring Jack’s Arkansas roots, she also mastered southern cooking. Her pecan pie and biscuits and gravy were the best! She was a true Renaissance woman. Teaching herself to sew, she became an excellent seamstress; making clothes, curtains, and bedspreads. She learned to knit in England, making vests, sweaters and more. In Italy, she took up crocheting and made custom dresses and suits for the girls. She left a legacy of beautiful, crocheted Christmas stockings-making one for each of her children, grandchildren and great grandchildren. When she began teaching, she taught herself guitar to accompany students’ singing, There was always a piano in the house and she loved to sit and play. Lina penned her life story after she retired. She joined gyms to swim and exercise, finding kick boxing a favorite, until at 80, her doctor suggested she stop-so she went on to Tai Chi which she continued until two years ago. Lina stayed closely connected to her Italian family, and had many joyous reunions during her frequent trips back to Naples. She enjoyed traveling and repeated trips to Mexico and Alaska. One of her greatest joys was camping by the ocean with Jack, at any opportunity. As a member of many organizations, such as Catholic Ladies Sodality, Sons of Italy, and Retired Military Wives, she enjoyed the social aspect of church and community. She volunteered her time to help others, teaching Sunday School and was a regular at St. Vincent de Paul… well into her 90’s. Being a proud American, she felt compelled to exercise her civic responsibility by voting, and working at the local polling site during elections. Her family here, though heartbroken, know that her intense love and faith will linger and transgress the physical boundaries of this earth, to ever touch the lives of those she loved. She lives on in many hearts . A mass for Carmela Cradduck will be held January 31, 2022 at 11:00 am, at Our Lady of Mt Carmel Church, 2700 Dover Ave Fairfield, CA. Celebration of Life will follow. For details, please Contact Don Cradduck at [email protected] or 707-372-5151. In lieu of flowers, a donation in her memory may be made to: St. Vincent de Paul Society c/o Our Lady of Mt. Carmel, Fairfield, CA.

The family of Carmela Cradduck created this Life Tributes page to make it easy to share your memories.