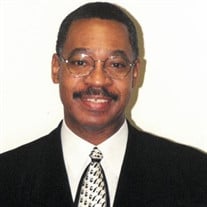 REFLECTIONS ON A LIFE WELL LIVED Carlton Eugene Spradley, was born July 24, 1953 in Macon Georgia to Cecil and Ruby Spradley. His growing years were spent like any typical child, attending school and participating in many fun gatherings with his eight cousins (all boys) and two brothers. As a teen, he worked part-time with Consolidated Investors, his fathers construction business. His father often said he worked harder than most of the adult men. After graduation from Northeast High School, he enlisted in the United States Air Force, serving nine years as a Command and Control Technician in the 22nd Air Force at Travis AFB, CA. In 1975, he was stationed in Turkey for a year before returning to duty at Travis Air Force Base. He was honorably discharged from the Air Force in November 1980 and decided to remain in California. Carlton worked for California State Auto Association as Insurance Agent Broker from 1980 to 2010. With 30 years of experience in insurance sales & service, he managed a book of business valued in excess of four million dollars and received numerous awards for his superior performance. Carlton married Rosalyn Patton in December 1999 and gained a blended family. His hobbies included traveling, fishing, collecting jazz music, spending time with family and watching the Raiders during football season. In 2008, he became a victim advocate and volunteered his time with Safe Quest Solano. He assisted in facilitating the "My Strength is Not For Hurting," Campaign for teen boys at Christian Life Fellowship Church. From 2014 to 2019, he served as Deputy Director of Advocates Against Domestic Violence in the African American Community (AADVAC); a non-profit domestic violence agency established by himself and his wife Rosalyn, to increase the community’s capacity to provide culturally specific resources and support for victims of domestic violence and sexual assault. In 2017, he worked as a residential counselor with Mary’s Help Residential Group Home that provided services for at-risk youth, getting them back on track and improving their lives. In 2018 Carlton & Rosalyn (Directors of AADVAC) became members of the Culturally Responsive Domestic Violence Network (CRDVN). The network consist of 17 culturally grounded and responsive domestic violence service providers in CA that have developed strategies to overcome challenges in their respective communities. Carton was working with CRDVN to cultivate their collective power to become a key voice in CA on domestic violence, particularly for the underserved community. Carlton was currently facilitating classes for the Solano County Domestic Violence Enhanced Response Team (D.V.E.R.T). He also counseled troubled youth, victims of violence and consistently served the community in various capacities. He is survived by his wife, Rosalyn Spradley of Vacaville, CA; son, Carlton Spradley Jr. (Cathy) of Fairfield, CA; step- son Howard Hines (Liza) of San Francisco, CA; and step-daughter, Raquel Osby (Matthias) of El Sobrante, CA; seven grandchildren: Riley, Ryann and Regan of San Francisco, CA; Nathan and Bryan of Fairfield, CA and Aaliyah and Kalyssa of El Sobrante, CA; two God daughters, Deanna and Soraya of San Francisco, CA; one brother, Cecil Spradley of Macon, GA; two sisters, Janice Spradley and Elizabeth Brown of Macon, GA and a host of relatives, nieces, nephews, cousins and friends. He was preceded in death by his parents Cecil and Ruby Spradley and brother Marcus Spradley. His kindness and positive influence will forever remain in the lives of all who knew him.

REFLECTIONS ON A LIFE WELL LIVED Carlton Eugene Spradley, was born July 24, 1953 in Macon Georgia to Cecil and Ruby Spradley. His growing years were spent like any typical child, attending school and participating in many fun gatherings... View Obituary & Service Information

The family of Carlton Eugene Spradley created this Life Tributes page to make it easy to share your memories.

REFLECTIONS ON A LIFE WELL LIVED

Send flowers to the Spradley family.