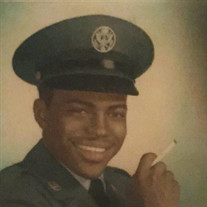 Carl Washington, a resident of Fairfield, CA, for the past 46 years, passed away at the age of 84 on May 23, 2021. Carl was born in New York City on April 5, 1937. He joined the United States Air Force in 1954, and spent 20 years serving his country. He served in Vietnam and was a Purple Heart recipient. He retired from the Air Force in 1975, permanently settling with his family in Fairfield, CA. He held positions in the private sector before full retirement in 1998. Papa, as most of the family referred to him, lived his life as a walking billboard for the classic song, "I did it my way". He was a strong man who lived his life with no excuses, regrets, or explanations. He will be remembered as a man who took care of his family and for being an absolutely amazing grandfather and great grandfather. He will also be remembered for his sense of humor and his unique ability to spin a story and present events in the most comical and entertaining manner. He is survived by his wife of 64 years, Peggy Washington. He is also survived by his four children, Cassandra Washington, Derek Washington, Carla Cooper, Carlissa James and son-in-law Herman James, all of Fairfield, CA; his grandchildren, Alexia Henning, Marlena Sheppard and grandson-in-law Tony Sheppard, Ralianna Garcia and grandson-in-law Victor Garcia, Jaden James, and Jayla Cooper; his great grandchildren, Camryn Cooper, Aiyanna Cooper, Anthony Sheppard, Aniyah Sheppard, and Noah Garcia. Funeral services and burial will be a private ceremony at the Sacramento Valley National Cemetery in Dixon, CA, with full military honors.

The family of Carl Washington created this Life Tributes page to make it easy to share your memories.

Carl Washington, a resident of Fairfield, CA, for the past 46...

Send flowers to the Washington family.