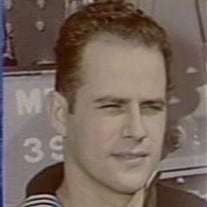 Stanley Robert Moore aka Bob January 20, 1931——November 21, 2019 Stanley Robert Moore , 88 years old, passed away November 21, 2019 at home surrounded by his family. Visitation will be held December 16, 2019 4pm-8pm, Service will be December 17, 2019 at 10am at Bryan-Braker Funeral Home 1850 W. Texas Street in Fairfield. The Burial will be at 1pm at the Sacramento Valley National Cemetery 5810 Midway Road Dixon with full Military Honors . A sure sign that Bob — he was Bob to his family and friends — didn’t expect to die, is the fact I am putting this obituary together without his “constructive criticism.” If he were here, he would say: “Don’t make it too long. Don’t say I died suddenly. Everyone dies suddenly. Don’t fill it with dates and times that are not important.” He would mean dates and times like his joining the Navy at the outbreak of the Korean War in 1950 — or his retiring as a Senior Chief Journalist, after serving as Press and Photo Officer for the 13th Naval District in Seattle, in 1972. For his second career, Bob returned to Washington D.C., where he wrote, photographed, and designed the layout of nature articles for the Naval Aviation News magazine as a GS-11. To become a GS-12, Bob left the Navy Department for the U.S. Treasury Department—where he wrote and designed savings bonds ads from 1975-1982. He Advanced to GS-13 by joining the Veterans Administration, where he wrote all the speeches for the Administrator of Veterans Affairs. He has also wrote articles, and speeches for President Reagan and supervised nation-wide photo journalism coverage of the VA— before retiring a second time in 1986. Now this is where he would become irritated. I can hear him saying: “You’ve said enough, now get on with it!” I do have to add: He got married to Ione while he was working on his Photo journalism Certificate at Syracuse University. Later, he earned a B.S. in Journalism at the University of Maryland and a Master of Education from the University of Virginia. Finally I must say : Bob loved his wife Ione, his life, his children Rory, Brian, Donna, and Valerie, his grandchildren, and great grandchildren. If I were a poet, I would also add: “Bob lived the way he thought was best—and died with all the dignity he possessed. ”Rest in Peace Dad, You’ll be missed.”

The family of Bob Moore created this Life Tributes page to make it easy to share your memories.

Send flowers to the Moore family.