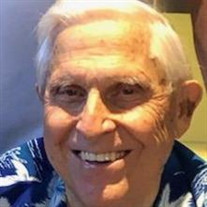 Billy Mack Perkins Oct. 8, 1931 - Feb. 9, 2020 Our Loving Father Billy Mack Perkins was called to Heaven to be with his wife of 64 years, Shirley Ann Perkins on Sunday February 9, 2020 at Kaiser Vacaville Hospital. Billy was born October 8, 1931 in Paris, TX. Dad graduated High School in 1949. Shortly after he attended the University of Texas pharmacy school. It was there, on September 5, 1950 when Billy met the love of his life, Shirley Ann Lyles, at the local skating rink. It was love at first sight, Shirley's little hand fit perfectly in Billy's hand, it was a match made in Heaven. Billy and Shirley were married on November 2,1951. Billy enlisted in the United States Air Force in 1952, where he had an amazing 28 year career. After retiring from the Air Force in 1980, Billy went to work for Kaiser Hospital in their Corporate Pharmacy division where he had another successful 20 year career. Billy served on the Travis Credit Union Board of Directors for 38 years and was a decorated Shiner and Mason as well. Billy is survived by his brother Earnest of Dallas, TX and sister Wanda Armstrong of Paris, TX along with his 4 children: Debbie and Dave Berg, Jim and Chris Perkins, John Perkins, and Jerry Perkins and Ginger Perez Quichocho; 8 Grandchildren: Dacia, Dane, Janel, Kelsey, Danae, Lareena, Bryonna, Tyler, 10 Great Grandchildren: Madison, Adalynn, Jason, Melodie, Natalie, Iliyonna, Jayce, Dash, Jet and Aspen. Funeral for Billy Mack Perkins will be Saturday February 22nd at Bryant Braker Funeral Home: 1850 West Texas Street, Fairfield, CA 94533. 707-425-4697. A viewing is scheduled from 12-1 pm, Funeral starts a 1pm with Military Honors concluding the service. Billy along with his loving wife Shirley will be laid to rest together later in the week at Sacramento Valley National Cemetery.

The family of Billy Mack Perkins created this Life Tributes page to make it easy to share your memories.

Send flowers to the Perkins family.