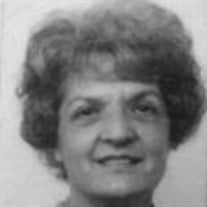 Betty "Chechee" Tracas, passed away in her home on August 11, 2020, at the age of 97 years. She was born on August 7, 1923 in Colliers, West Virginia to coal miner, Angelo Kolevakis and his wife, Olga. Betty graduated as a registered nurse from the Ohio Valley General Hospital School of nursing, serving in the US Army Cadet Nurse Corps in her senior year, and graduating as a member of the 1945 Victory Class. She moved to El Cerrito, California and worked as a nurse at St. Francis Hospital in San Francisco before serving in the US Navy Nurse Corps, as an Ensign in World War II and was stationed at the US Navy Hospital in Oakland, California. Betty is a charter member registered at both, the World War II veteran's memorial in Washington DC and in the Women In The Service of America, WMSA, at the entrance of Arlington National Cemetery. She was also a participant in the long term National Nurses Health Study. Betty was attending a house party in San Francisco in 1946 and it was there that she met her future husband, Sam, who was a US Navy veteran attending the University of California in Berkeley. They were married in 1948 at St. Mark’s Episcopal Church in Berkeley. Betty served as an emergency room nurse at the Queen of the Valley Hospital in Napa for over thirty years. She enjoyed preparing family picnics and outings at Carmel, Santa Cruz, Hoberg's Resort, Yosemite, Yellowstone National Park, and also her famous family traditional dinners on holidays and special events. She encouraged all of her children to enjoy music and play an instrument. After dinners, she would gather with them around the piano to join in group singing of old forties, including Greek and Spanish songs. Betty planned trips with her children and grandchildren to Yosemite and Yellowstone National Parks. Betty and her husband, Sam, took many trips to various European countries as well as the Greek Islands and Hawaii. She enjoyed attending the graduation of her children and grandchildren from various universities around the country. Betty's hobbies were taking care of her yard and flowers for which she won the "Pride In Fairfield" awarded by the City of Fairfield; attending musical and dramatic productions, and listening to music throughout the day; reading, cooking, and making people happy. She was a fun person to be around with and was a source of humor and positive encouragement. Betty enjoyed entertaining and dressing well-always young in heart! Betty shared her love of life with us and we will always remember the wisdom she shared with us. She was one of a coal miner's sin daughters, a life well lived. God Bless America. Betty is survived by her husband, Sam; Children, Cynthia (Stephen) Wesp, Betty Ann, Steven (Stevi) Tracas, Annette (James) McCutcheon; her adoring grandchildren, Daniel, Julie, and Lia Wesp, Ashley and Alexandra Tracas, and Sean and Kimberly McCutcheon. Betty leaves behind her sisters, Ann Dorman Hardy, Alice Freimmersdorf, and Jane (Tony) Gomez. She was predeceased by her sisters, Helen (Ben) Frankfield and Mary (John) Zann. Due to Covid-19, services will be private for her family. Burial committal will also take place, privately, at the Sacramento Valley National Cemetery in Dixon. A “Celebration of Life” honoring Betty, will be held at a later date.

Betty "Chechee" Tracas, passed away in her home on August 11, 2020, at the age of 97 years. She was born on August 7, 1923 in Colliers, West Virginia to coal miner, Angelo Kolevakis and his wife, Olga. Betty graduated as a registered nurse... View Obituary & Service Information

The family of Betty "Chechee" Tracas created this Life Tributes page to make it easy to share your memories.

Betty &quot;Chechee&quot; Tracas, passed away in her home on August 11,...

Send flowers to the Tracas family.