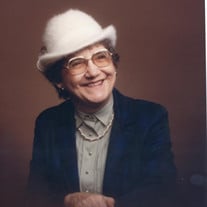 In remembrance of Betty Louise (Cochran) (Salyer) (Croft) Bryan Betty C. Bryan, 98, of Vacaville, California passed into the arms of her Jesus Christmas night December 25, 2020 while at Bright Minds Residential Care. She was preceded in death by her beloved husband retired Lt Col William Charles Bryan lately of Vacaville, California and her only son Steven Loren Croft lately of Medford, Oregon. She is survived by her daughter Karen Louise Novak and husband Joseph Jr of Fairfield, California; two daughters-in-law, Billie Mixon of Gresham, Oregon and Oolah Croft of Medford, Oregon; two grandchildren, Kristina Louise St. Sauver and husband Brent Alexander of Centerton, Arkansas and Sean Loren Croft and wife Darlene of Battleground, Washington; and two greatgrandchildren Jerrica and Devin Croft. Because of COVID constraints, a private service will be held January 8, 2021 at 1:00 PM in the garden courtyard of Bryan-Braker Funeral home. In lieu of flowers, donations may be made to The Vacaville Art League and Gallery, Vacaville, California. I remember Mom as soft-spoken, comporting herself as a “lady” until confronted by something she felt was wrong. Then she showed the woman inside: spirited, opinionated and independent, a person who stood up for what she believed to be right. Born on Thanksgiving Day November 30, 1922 in Claflin, Kansas, she was the daughter of Rex and Mabel Cochran. She grew up in the Midwest, moving frequently so her father could find work as a cook during the difficult economic era stretching through the Twenties and Thirties. As a very young child her appendix broke and she spent 3 months in a hospital. She had to “take” the first grade “over” again. This “humiliation” spurred her on and she became an excellent student. She was named valedictorian of her graduating class at Brighton High School in Colorado. Like my Grandma Cochran, my Mom was a hard worker and never idle. A single mother, in those early years, she kept busy with her job as an automotive bookkeeper. Still she was home every night by 5:15 to cook us dinner, share the evening with us and tuck us in with a bedtime story. Later, as she grew more and more proficient in her accounting skills, she took employment as office manager at several different car dealerships. During this time, she always found time to take Steve and me on an annual family vacation, trips to the coast and forests of California, Oregon and Washington, often visiting with friends and relatives. Traveling was in her blood! She loved road trips, cruises and flying with tour groups. When she retired she volunteered at the Fairfield Senior Center as a tour planner and accompanied her fellow seniors on many trips. In her 80s, she and Bill took a two week cruise to the Hawaiian Islands where they toured the “Punch Bowl”, something on Bill’s bucket list. Being a business woman most of her life, she was active in the Women’s Chamber of Commerce and the Solano County Business Women’s Association. Her hobbies included oil and water color painting, researching her genealogy and reading mystery novels and tales of Ireland. She remained an avid reader through most of her life until she lost her sight in her 90s. She at one time belonged to the Suisun Yacht Club and loved navigating for the boat rallies. She danced, sometimes with a guy, sometimes with her Sis Ginnie, sometimes on her own. She loved sports. Together we watched bowling, wrestling, roller derby, basketball, 49er football and Oakland A’s baseball. She moved many times, but always she found her Rock in a local church. As a young woman, alone raising 2 children, she began attending the Baptist Church in Martinez. And each time after that when she moved she found another congregation and pastor to love and support her. She taught Sunday school to the very littlest ones. She sang in the choir. She helped with the bookkeeping, often becoming the Church treasurer. In her 70s she met and fell in love with Bill. His church home, Vacaville Christian Church, became hers. As she had done many times before, she became an active member until health and COVID restrictions kept her away. Bill also introduced her to the world of American Veterans. She quickly became deeply involved joining the Auxiliary. She also volunteered her services to the Veterans Hall in Vacaville, making many new friends. Soon after Bill’s death, Mom moved into Merrill Gardens Retirement Community to be near her sister Virginia. She remained active in that setting with Wei bowling, singing, drawing and helping to run the residents’ little store for which she kept the books. She was an energetic force on the Residents Council, holding nearly every office. Over the past 2 years declining health, loss of sight and hearing and COVID restrictions reduced her contact with the world and those around her. Now, at last, at peace, she will be laid to rest beside her cherished husband Bill at the Sacramento Valley National Cemetery. Her granddaughter Kris expressed her passing beautifully in her Facebook Posting: My Grandma Betty is no longer in pain and not knowing the people around her. She spent her life in service to her Lord and enjoying painting beautiful scenery. She loved the holidays spending time with family and it is with irony that she was born on Thanksgiving and passed away on Christmas. I hope she finished Christmas Day in heaven with Bill dancing, as they loved to do. I hope heaven has WWE "wraslin' " and she can watch it any time she wants. I hope her favorite hymns are playing. I also hope that she knows she is loved and Christmas will not be same without her songs and her cranberry mini muffins. Love you Grandma!

In remembrance of Betty Louise (Cochran) (Salyer) (Croft) Bryan Betty C. Bryan, 98, of Vacaville, California passed into the arms of her Jesus Christmas night December 25, 2020 while at Bright Minds Residential Care. She was preceded in death... View Obituary & Service Information

The family of Betty Cochran Bryan created this Life Tributes page to make it easy to share your memories.

Send flowers to the Bryan family.