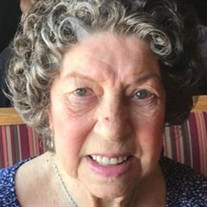 Betty Louise Johnson Almstrom of Fairfield passed away January 21st at age 93. Betty was loving wife, caring mother and grandmother and an extremely gifted artist and crafter. She married Bob Almstrom, a widower and father of two in 1959 after meeting him through a mutual friend. They were happily married for 50+ years before Bob’s death in 2011. Bob and Betty shared a love of competition, activity and their kids. They enjoyed bowling and golfing together and were the most competitive team you probably ever encountered! Betty loved handmade things and filled her life and home with many treasures including thousands of cherished Barbies. She earned many awards for her china painting, reproduction dolls, and needlework entered at the Dixon May Fairs and the Fairfield Juried Art Shows. She also crocheted, cross stitched, embroidered, sewed, oil painted and ceramics. Her large family originally came from Texas where her father had been a Texas Ranger and a widower. He married Betty’s mother when she was eighteen. They moved to her grandfather’s property in San Jose. Betty, or Tiny Baby as she was called, remembers working hard at picking fruit and vegetables and canning. Her best memories were times with her closest sister Alma; climbing trees, sewing and chasing after the ice truck. She completed high school and went to work in at Hale’s department store as the Revlon counter girl. She moved to Napa on her own as a young woman. She worked, joined a bowling league to meet people, and fished daily in the Napa River to feed herself. She traveled often to Hayward to help care for her nieces and nephew, Carol, Peter and Sharon. She had a full and fun life as Betty Johnson. In later years, Betty also took up golf to be with Bob. She played for many years at Green Tree in the Twice Arounders and was 88 years old before she gave it up! She moved to Cornerstone Assisted Living in October of 2020. The family would like to thank all the caring people at Cornerstone and the Yolo Hospice. She is preceded in death by Bob and all her siblings. She is survived by her children, Jill Smith, Jay Almstrom and his wife, her granddaughter Sara Steinkellner and husband, Nick and Cody Almstrom and her great grandchildren, Ashley Steinkellner and Damian Almstrom. She would also want us to remember her nieces and nephew and their families. There will be a drive through memorial at Bryan Braker Mortuary on February 16th, 2021, 10am-12pm. In lieu of flowers, please send contributions to any Veterans Organization or Yolo Hospice.

Betty Louise Johnson Almstrom of Fairfield passed away January 21st at age 93. Betty was loving wife, caring mother and grandmother and an extremely gifted artist and crafter. She married Bob Almstrom, a widower and father of two in 1959 after... View Obituary & Service Information

The family of Betty Louise Johnson created this Life Tributes page to make it easy to share your memories.

Send flowers to the Almstrom family.