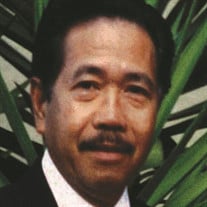 On September 14, 2021, a sweet jovial soul was released from his failing body in the comfort of his home surrounded by his loving family. He was undoubtedly reunited with his beloved wife Clarita of 62 years, whose passing he had been grieving... View Obituary & Service Information

The family of Bernardo Oxales Jarumay created this Life Tributes page to make it easy to share your memories.

Send flowers to the Jarumay family.