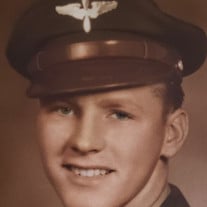 Ben Rex Thompson passed from this life while residing in assisted living in Vancouver, Washington on February 19, 2020. Ben was 93 years old. Ben was born in Albia, Iowa on May 9, 1926 to Gladys and Paul Thompson. He graduated from Albia High School in 1944 and shortly afterward enlisted in the United States Army Air Corps to serve his nation during the latter days of World War II. Upon completing his military training in Victorville, California, he was sent overseas to Manila, Philippines. During the time of his military service in Manila, Philippines, Ben married Andrea (Andie) Maghouyop on July 26, 1946. A son named Robert was born to them in 1948, but tragically, Robert only lived 24 hours. On August 10, 1950, a second son was born to them named James William Thompson. After receiving an honorable discharge from the U.S. Army Air Corps in July 1946, Ben took employment in the Philippines as a Civil Servant for the United States government. He was in Civil Service for decades, retiring at the age of 57 in 1983. His career brought many transfers for him and his family; from the Philippines, to San Gabriel, California, to Klamath Falls, Oregon, then back to the Philippines where he worked at Clark Air Force Base, next to San Francisco, California, to Pearl Harbor, Hawaii and finally to the Pentagon in Washington, D.C. It was during their time in Klamath Falls, Oregon, that a daughter was born to Ben and Andrea (Andie) named Lynn Marie Thompson (Robinson.) Lynn was born on January 16, 1957. Ben was preceded in death by his infant son, Robert, and his loving wife of 65 years, Andrea (Andie.) Ben is survived by his son, James William Thompson (Linny), three grandsons; Jared Thompson (Alea German), Dylan Thompson (Claudia Ramirez) and Troy Thompson. Ben is survived by his only great-grandchild, Asher Ben, the child of Jared Thompson and Alea German. Ben is survived by his daughter, Lynn Marie Robinson (Scott), three grandchildren: Cole Robinson, Tess Robinson, and Eli Robinson. Ben is dearly missed by his loving family.

Ben Rex Thompson passed from this life while residing in assisted living in Vancouver, Washington on February 19, 2020. Ben was 93 years old. Ben was born in Albia, Iowa on May 9, 1926 to Gladys and Paul Thompson. He graduated from Albia High... View Obituary & Service Information

The family of Ben Rex Thompson created this Life Tributes page to make it easy to share your memories.

Ben Rex Thompson passed from this life while residing in assisted...

Send flowers to the Thompson family.