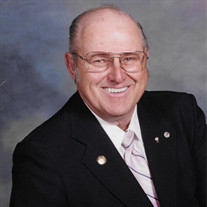 Beldon Charles Scott (Scottie) Obituary It is with deep sorrow and much love that we mourn the passing of Beldon C. Scott (Scottie), of Vacaville on January 15th, 2021, at the age of 83 years old. Scottie was born on October 12, 1937 in New Orleans, Louisiana to Charles B. Scott and Lena (Carderella) Sylve. In 1954, at the young age of 17, he proudly joined the US Navy as a Fireman Electrician. Scottie graduated from the US Naval Training Center in San Diego, California and transferred to the Mare Naval Shipyard, California, where he met his wife of 62 years, Dorothy G. Goodrum. After Scottie married, switched from the US Navy to the US Air Force, as a Generator Electrician, where he served for 8 years. Upon his completion of the USAF he continued to work at Mare Island as an Electrician General Foreman until he retired in 1989. “Grandpa” as many of us referred to Scottie, was always willing to help those that needed it most. He was an avid Catholic and an active member of Knights of Columbus. His deep love for his Faith, family and Cajun food will not soon be forgotten. Loving father of Charles (Valerie) Scott, Carl Scott, Chris (Linda) Scott, Cynthia Scott, and Corey (Anabelle) Scott. Proud grandfather of Sean (Holly) Scott, Angele (Chris) Oliver, Jaclyn Scott, Brittni LaDart, Ashlynn (Brad) Depew, Dayna Scott, Connor Scott, and Denna Scott. Great-grandfather of Liam, Audrey, Anya, Elijah, and Ryker . Brother of Francis and her late husband Julius N. Jacobsen Further survived by nieces, nephews, other relatives and friends. Grandpa's Favorite St. Christopher Prayer Grant me, O’Lord, a steady hand and watchful eye, that no one shall be hurt as I pass by. You gave life, I pray no act of mine may take away or mar that gift of Thine. Shelter those, dear Lord, who bear company from the evils of fire and all calamity.

Beldon Charles Scott (Scottie) Obituary It is with deep sorrow and much love that we mourn the passing of Beldon C. Scott (Scottie), of Vacaville on January 15th, 2021, at the age of 83 years old. Scottie was born on October 12, 1937 in New... View Obituary & Service Information

The family of Beldon Charles Scott created this Life Tributes page to make it easy to share your memories.

It is with deep sorrow...