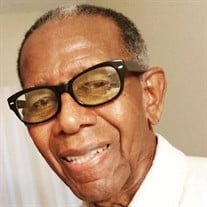 Arthur Jay Hebert, 95, passed away Sunday, October 27, 2019 at his residence. Arthur was born August 25, 1924 in Livingston, Louisiana to George and Addie (Parker) Hebert. He was the youngest of eight children: George Jr., Gertrude, Gus, Norman, Walter, Harold and Ivan. They preceded him in death. Arthur enlisted in the U.S. Marine Corp at Camp Lejune in North Carolina and served in the South Pacific (Pelilu/Marshall Island) from 1943 to 1945, and the U.S. Air Force at various bases in the U.S., Germany, and England from 1951 to retirement at Bolling AFB in Washington DC in 1969. He received numerous awards and decorations, most notably the Asiatic-Pacific Campaign Medal, World War II Victory Medal and the AF Commendation Medal. He was later employed as a Burner Welder for EXXON Company in Baton Rouge, LA from 1969 to 1980. Arthur was a member of Saint Stephen CME Church of Fairfield, CA where he faithfully served as a greeter and in the food pantry for a number of years. He was well known for his 7-Up and sour cream pound cakes. He could also prepare some amazing ribs and pork-n-beans. Arthur was joined in marriage to Ruby Lee (Knox) in Baton Rouge, LA; Clara B. (Swearington) in Oakland, CA; and Millie (Green) in Vallejo, CA, all had preceded him as well. Arthur's oldest daughter, Beverly Elaine Sanford and a grandson, Leo ('Skeeter') Sanford have also preceded him. Arthur leaves to cherish his memory, his children: Candace Y. Thagard and Howard Thagard (son-in-law) of Beaumont, CA and Arthur G. Hebert of Sacramento,CA; grandchildren: Malcolm and Sha Mack, Patrick Hebert, Shawna and Jerome Young, Sharon and Aaron Leavitt, Steven Hebert, Daniel Hebert, and Brittany Thagard; great-grand children: Jaya Hebert, Briajanae Hebert, Ariana Hebert, Raven Young, Olivia Leavitt, Patrick Hebert, Leo Leavitt and Miles Mack. There are a host of nieces and nephews in California and Texas, those who affectionately called him "papa", Angela, Tony, Rita, Annette, Beverly, George, extended family, friends and those who came to know him at the senior facilities, The Village at Heritage Park and River's Edge, where bingo was his most favorite past-time. A public viewing will be held on November 2, 2019 from noon to 2 PM at Bryan-Braker Funeral Home. Interment will be in Rolling Hills Memorial Park on November 19, 2019 at 2 PM. Arrangements are under the direction of Bryan-Braker, 707-425-4697. You may sign the guestbook at www.bryanbraker.com.

The family of Arthur Hebert created this Life Tributes page to make it easy to share your memories.

Send flowers to the Hebert family.