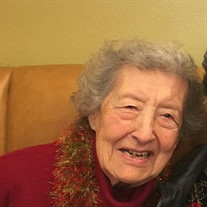 Antonia (Toni) Espinoza Gooch - July 4, 1924 - January 20, 2022. Toni passed away at her Dixon, CA home following a stroke at age 97. She enjoyed her special July 4th birthdays every year. She was born in Pittsburgh, CA in 1924 to Jose Zaragoza Espinoza and Maria Alvarez, both from Mexico. Toni was predeceased by her older brother, Joe, younger brother, Frank, her son, Bill in 1987 and her husband, Leslie Louis Gooch in 2017. Toni loved animals, especially cats. She and her brothers had goats, chickens and pets while growing up as youngsters. They also liked helping their father push his bicycle up the steep hill to their home at Point Richmond every afternoon when he came home from work.. The family moved to Dover Street in San Pablo when the children began attending public school. Tragedy struck when Toni's mother died of tuberculosis. The three children were tested and Toni and Frank were both sent to children's sanitariums in the mountains where they received daily fresh air, sunshine and special diets and health procedures to restore their health. Frank's recovery was quicker than Toni's. Due to Toni's time away from public school, she was two years behind her peers in graduating from high school. The three Espinoza children were placed in foster homes not far from where their father lived so they could spend time with him on weekends. Toni learned a variety of homemaking skills, hospitality and other talents from Mrs. Bloom, the lady she spent most of her foster care time with. Toni seemed to excel at whatever she took on. She was academic, artistic, a great cook, seamstress, homemaker, and a valued employee wherever she worked. Her first job was working for Western Union. She and her co-workers enjoyed traveling the world with tour groups for their vacations. Toni saved mementos and money from Greece, Guatemala, Mexico and other countries where she'd toured. Toni continued her interest in reading travel brochures, maps and tour plans as long as she lived. After Toni married her husband, they moved from San Pablo to Dixon, then to Fairfield where they managed an apartment complex before moving back to Dixon. She, Bill and Les would travel periodically to B.C. Canada to visit Cheryl and her stepdaughter's family. Toni was always prepared for all kinds of weather. Later, they'd visit them in Colorado. Toni was a favorite grandparent and mother-in-law. She was also beloved by numerous nieces, nephews, cousins and sister-in-laws whom she kept in touch with by visits, calls or correspondence. She was admired in the workplace, as well as in her church callings, for her talents for organization, planning, social skills and her gifts of love and service to others. She was always a faithful friend and correspondent with everyone she ever met and connected with. She impacted all she met just by her sincerity, interest and love for everyone she met.

Antonia (Toni) Espinoza Gooch - July 4, 1924 - January 20, 2022. Toni passed away at her Dixon, CA home following a stroke at age 97. She enjoyed her special July 4th birthdays every year. She was born in Pittsburgh, CA in 1924 to Jose Zaragoza Espinoza... View Obituary & Service Information

The family of Antonia Espinoza Gooch created this Life Tributes page to make it easy to share your memories.

Send flowers to the Gooch family.