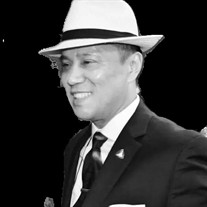 Dr. Anthony Rama Maravillas passed away on September 13, 2020 at Kaiser Permanente, Vallejo, CA. He was born on June 1, 1961 at Travis AFB, son to Ricardo and Bonifacia Maravillas, Fairfield, CA. Anthony was a graduate of Fairfield High School and received his Bachelor's degree from Chico State University where he was a member of Sigma Nu. He received his Master’s degree and Doctorate in History from the University of Illinois at Chicago. He taught history at DePaul University, Columbia College, and College of DuPage. His primary interest was in the presidential years of Richard M. Nixon. He authored several papers to include Understanding Richard Nixon and His Era. On July 22, 2011, he was a featured panelist during a CSPAN broadcast at the Richard Nixon Presidential Library. His published works include an article on Mamie Eisenhower in A Companion to First Ladies and a chapter in A Companion to Richard M. Nixon. Because his father, Ricardo, was a Bataan Death March survivor, Anthony developed an interest in the role played by the Philippine Scouts before and during World War II. For many years, he was an active member of several organizations such as the Philippine Scouts Heritage Society and the Bataan Corregidor Survivors Association. Anthony was a lifelong member of the Sigma Nu, Iota Kappa chapter at CSU Chico actively organizing and participating in alumni events. While living in Chicago and working for United Airlines Anthony made many friends and enjoyed the local sports scene. He is survived by his siblings, Glenn (Gayle) Maravillas of Yorktown, VA; Evelyn (Bill) Bunger of Paso Robles, CA; Steven (Laura) Maravillas of Tampa, FL; and Joseph (Mary Ann) Maravillas of Hercules, CA. He relished his role as an uncle to his 10 nephews and nieces. He will always be missed by his family and many friends. The Memorial Service will be at 10:00 a.m. Tuesday, September 29, at Bryan-Braker Funeral Home, Fairfield. Due to COVID-19 restrictions, only family members will be allowed at the memorial service. On a date to be announced, a Celebration of Life will be held for Anthony’s friends, extended family, and local friends. The family plans to stream the service through Facebook Live. Drive-by viewing is an option for extended family and friends who wish to do so. Interment will be at Susuin-Fairfield Cemetery. In lieu of flowers, the family requests donations to the ALS Association (www.als.org) -Arrangements are being handeled by Bryan-Braker Funeral Home -

The family of Anthony Rama Maravillas created this Life Tributes page to make it easy to share your memories.

Send flowers to the Maravillas family.