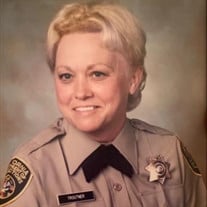 “Nana” Ann Troutner, mother, grandmother, and great-grandmother, has gone to rest on February 25, 2021 in Fairfield, California. She was 82 years of age. Ann was born Annah Mae Ferguson, on August 15, 1938 to Christine and Earl Ferguson of Moore County, North Carolina. Ann was the second born of four children; John, Ann, Charles, and Dorothy. She was preceded in death by her father (Earl Ferguson), mother (Christine Ferguson), son (Anthony Douglas), and brother (John Ferguson). Ann relocated to Suisun City, California where she worked as a hair dresser for 20 years at Travis Air Force Base. Ann went on to receive a degree in Criminology at Solano Community College (Dean’s List) and began working as a correctional officer at CMF (California Medical Facility) in Vacaville, CA where she retired after 10 years of service. After retirement, Ann spent time traveling with her daughters Beverly; Renee; and granddaughter; Conni. She has three children: son, Anthony Douglas (1957-2008); daughter, Beverly Challburg; daughter, Renee Rossetti-Bell (Matt). She has six grandchildren; Conni Jespersen (Clint); Carla Wood (James); Samantha; Ashlyn, Chyanne, Riley. Additionally she has three great grandchildren: Bailey, Aiden, and Kate. Ann loved spending time with her family and grandchildren. She loved hosting Christmas and Thanksgiving dinners at her home, always cooking delicious meals full of flavors from the Carolinas. She was an avid reader of the newspaper and was always up-to-date on current events. Until the time of her passing, she spoke on the phone daily with her sister Dorothy, whom she considered her best friend, back in North Carolina. A small memorial service of immediate family was held at the home of Ann Troutner on Sunday, February 28, 2021. In lieu of flowers, that family requests donations to be made in her honor to the Veterans Memorial Fund.

&#8220;Nana&#8221; Ann Troutner, mother, grandmother, and great-grandmother, has gone to rest on February 25, 2021 in Fairfield, California. She was 82 years of age. Ann was born Annah Mae Ferguson, on August 15, 1938 to Christine and Earl Ferguson... View Obituary & Service Information

The family of Ann F Troutner created this Life Tributes page to make it easy to share your memories.

Send flowers to the Troutner family.