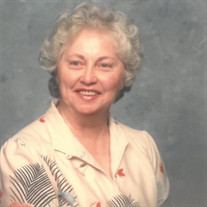 Alice Mae White-May On Sunday January 24, 2021 Alice Mae May 89, passed away peacefully in her sleep at home after a long illness. Alice was born in Missoula, Montana on May 1st 1931 to Ray Leon Surbrook and Ruth Alice Cazier. The Family moved to Tacoma, Washington in 1945 and she graduated from Lincoln High School in 1949. Alice married Carlos White in 1950 and had 4 daughters, Carla J, Debra R, Sharon F and Keri M. In the summer of 1957 they moved to Suisun City, CA. In August of 1970 Alice Mae married Ross F May and the two of them built a life together in the Fairfield area, with Ross being stationed at Travis Air Force Base. Ross had 2 sons, Thierry (Cathy) and Norbert (Leslie). Ross gave us all opportunities that was never dreamed of. Alice worked for the Fairfield-Suisun Unified School District for 19 years, starting as a attendance clerk and during recess she’d supervise the playground on the 5th & 6th grade side. In the early 70s she continued her careeer at Charles Sullivan Middle School and worked there till her retirement. Alice is survied by 3 of her 4 daughters Carla, Debbie who have no decendants. Sharon married Steven Samo of Fairfield, and had 3 sons, Jay (Michelle), Jeramy (Monica) & Jamey, later having a daughter Michelle R White, including 5 Great-grand Childen, Delaney, Kayleen, Dominique, Gianna & Nikko and a Great Grand child, Mateo. Keri who married Rocky Golden of Suisun City, and had Alis, Robert & later having Nicole (Thomas) Andrews, including 8 Great grand children, Benjamin, Khody, Kaleb, Angelina, Alexandria, Lucius, Troy & Nova. Ross’ son Thierry (Cathy) May had 1 son Brian, which includes 1 Great grandchild, Isreal living in Porterville, CA. Norbert had a son Byron Raco who lives the Sacramento Area, later married (Leslie) May and had 2 more sons Justin and Jessie May of Chico, CA. Alice was a wonderful Mother, Grand Mother & Great-grand Mother and got much joy watching her family grow. She was a Girl Scout leader, enjoyed bowling on a team for many years, was a avid crocheter, making dollies and crocheting Afghans for all the family and friends, later taking up plastic canvas. Alice’s will be terribly missed by her family and many long time friends that she met over the 64 years living in the area.

Alice Mae White-May On Sunday January 24, 2021 Alice Mae May 89, passed away peacefully in her sleep at home after a long illness. Alice was born in Missoula, Montana on May 1st 1931 to Ray Leon Surbrook and Ruth Alice Cazier. The Family moved... View Obituary & Service Information

The family of Alice Mae May created this Life Tributes page to make it easy to share your memories.

Send flowers to the May family.